The first article of our February issue is written by Márton Csáki about the Budapest Ghetto memorial celebration of the 17th January. János Gadó found that “with this demonstration Hungarian Jews created a good position For them­selves: their various organizations were capable of cooperating effectively, and get ten thousand peo­ple to gather, to express their message in the modern language of demonstration – despite minor technical problems, they were capable of raising the attention of the media” .

In our section ‘Esther’s Bag this month a radical feminist, Andrea Dworkin is in focus, whom the author of the essay describes as “a dedicated, uncompromising believer of the fact that all sexu­al intercourses are potential rapes. There is no need to jump into conclusions though: the author only differs from average feminists in that she does not stop before the logical end of an analysis, but actually states something that many others experi­ence as well. Dworkin does not claim that love- making equals violence, but believes that hetero­sexual acts hold the potential of violence, and this is experienced by many more than dare or are capable of acknowledging it, even to themselves.”

Viktória Lugosi writes about Stephen Hawking, the outstanding physicist who is crippled but is often mentioned on a par with Albert Einstein.

We publish five larger pieces about the Middle- Eastern conflict. János Gadó puts it this way: “Islamic fundamentalism is sometimes referred to as islamic fascism. The comparison is not unfounded: it expresses the fact that through its modernization the Islamic world has arrived to the era of totalitarianism…. The real cause of the hostile feelings towards Israel is not the conflict with the Palestinians. This one-time cause is only a pretext today: the real reason is the Arabic- Islamic world tumbling from one failure to the other, searching for redempting ideologies and seeking a scapegoat.”

László Seres describes the anti-Israel hatred campaign of Palestinian media. “On the official television channel of the Palestinian Authority a little boy is shown encouraging another even smaller, stone-throwing boy: Do not be afraid, Allah is with us, the stones in our hands have changed into Kalashnikovs.”

We talk about how widespread the negation of the Holocaust has become in Arabic countries. The ex-communist French author, Roger Garaudy’s book “The basic Myths of Israeli Politics” (published in 1996) in which he refers to the Holocaust as a Zionist lie, through the years has become a sort of Bible for the Arabs.

Attila Novák’s first article tells about the Palestinian refugee situation, his second writing sums up the history of the “Territories”.

Our World section contains a demographic sur­vey of Jews living in Russia.

We publish an extract of an interview with writer Magda Székely: ‘The survivor feels remorse because surviving was a matter of luck. It was hard to cope with this burden. Perhaps this is what forced me to write about it, because I thought nobody would talk about it. At that time it looked like no one would.”

Pál Várnai writes an obituary for the recently deceased writer, Mária Ember. We also publish a critique of painter László Fehér’s exhibition that was on display until January 2002 in Műcsarnok, the great exhibition hall. 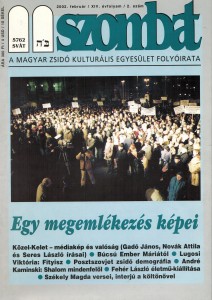