Gábor T. Szántó, our editor-in-chief, participated in the annu­al Limmud conference on Jewish culture in London. Commenting on the event, Szántó notes that “in addition to the professional organisation and the rich tapestry of the most diverse views, what most impressed me as a Hungarian Jewish observer was that Jewry gave the impression of being a many-facetted, flourishing, free and democratic culture.”

The Federation of Jewish Communities in Hungary (Mazsihisz), Hungarian Jewry’s official organisation, is undergoing a slow trans­formation: recently, the Neolog (Conservative) rabbinical body wrote an open letter to the leadership of the Federation in Mazsihisz’s official paper, demanding a greater say in religious and cultural matters and more financial support. While the rabbinical leadership’s attempts to define itself vis a vis the secular leadership is applaudable, it is to be regretted that their demands do not go beyond asking for a greater slice of authority and funds, and that there is no trace of a vision for the future.

Our media review focuses on the articles concerning the Middle Eastern situation. The right-wing daily, Magyar Nemzet stands out by its highly biased reporting, part of which includes repeating the rumours published in various Arab journals without any critique: “According to Arab press, the US military in Iraq is harvesting and selling human organs. According to the Middle Eastern media, this secret practice was noticed by their European allies, who reported to their high command, but were instructed to keep silent on the matter.” Stories of this type are published as “reportage” in the sin­gle right-wing Hungarian daily.

In an interview with Viktor Karády, the renowned sociologist and historian living in Paris, author of countless studies on Hungarian Jewry, Karády wryly notes that “we must give up the illusion that history is synonymous with progress and that the world is proceeding towards some sort of final peace and harmony. This was the utopia of Enlightenment, the ideological source of Socialism and a spate of other universal salvation ideologies. Unfortunately, history has nothing to do with redemption. ”

In his commentary on Mahmoud Abbas’ election as Palestinian president, László Seres notes that “similarly to his predecessor who regarded terrorism as a strategic and not as a moral problem, the new Palestinian president will be judged by his actions, rather than by his words.”

The Israel Democracy Institute recently conducted a survey on the current state of Israeli Democracy. A shortened Hungarian ver­sion of it’s findings – adopted from the journal Panim – is pub­lished in this month’s issue.

The first World Congress of “Rabbis and Imams for Peace” dis­cussing topics ranging from co-operation to the Middle Eastern conflict was held with the participation of fifty rabbis and fifty imams in Brussels in early January, Our comment “It yet remains to be seen, however, how soon the spirit of the declaration on peace will filter down to the Palestinian mosques.”

In our section of world affairs, Ildikó Eperjesi comments on Turkey’s admission to the European Union. “In view of the Europeans’ anti-Israel attitude, Turkey will probably break off her traditional good relations with Israel as part of the integration process and will vote with the EU in the United Nations. Leading Turkish politicians and the mainstream press have already voiced anti-Israel sentiments, which a few years ago was unheard of in Turkey.”

In our literary section we publish an excerpt from Carl Friedman‘s novel: Nightfather. The author reflects on her experi­ences as a child of Holocaust survivors. 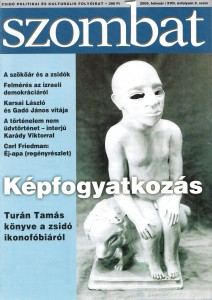