The front page of the November issue of Szombat shows of the opening of the new premises of the Cultural Federation of Hungarian Jews. We have also included a photo report on the Budapest Jewish Community Centre that was recently opened. In our editorial Iván Simon writes about the need for better communication between the various Jewish organizations and the need for organizing a conference in order to reach a consensus on basic issues, such as education, fear of anti-Semitism, combatting anti-Semitism and genuine representation of Jewish interest – also to international Jewish organizations -, and, also, to define the long-term strategy for the Hungarian Jewish community.

A survey is now under preparation on the Jewish properties confiscated in 1944 with the aim of presenting a specific and precise value in the negotiations over compensation conducted with repre­sentatives of the Hungarian state.

In an interview given to Gábor T. Szántó, Ferenc Erős, a social psychologist speaks about the effects of his parents’ repressed Jewish identity and about the silence surrounding the ’Jewish question’ in his family – and how he only found his own Jewish identity through his research on Jewish issues. He voices his conviction that a genuine Jewish community experience is all but denied to individuals who only found their way back to the Jewish fold in their 50s. His poems and his research themes are the intellectual elaboration of his attraction to, and fascination with, traditional Jewish life.

In reaction to earlier statements made by Yossi Beilin, Deputy Foreign Minister of Israel, the president of the World Zionist Organization, Gad Ben Ari has promised cautious reforms instead of sweeping organizational changes. At a press conference held in Budapest Yossi Beilin has again repeated his charges that the World Zionist Organization and the Jewish Agency are plutocratic, oligarchic organizations in dire need of reform.

The section on Israel features an essay by Tibor Várkonyi on the long-term perspectives of Near eastern peace, on the activity of capitalist klibbutzim and on newly-launched commercial television channels.

Ágoston Schmelowszky’s paper surveys the mention on Channukah in the Bible.

Literary critic Tamás Lichtmann reviews one possible strategy for survival, as reflected in the life of Jewish doctor who is repeatedly forced to make difficult choices. Ferenc Erős’ novel recounts the life of a Holocaust survivor who becomes a Communist, another distinctive and, also, tragic strategy pursued by Holocaust survivors in eastern Europe.

In an interview given to György Szegő, art historian Éva Gera talks about the sculptor Dezső Bokros Birman, whose works illustrate the present issue of Szombat. We have included a review of Woody Allen’s new film, “Manhattan Murder Mystery”, and of the new cassette featuring the Goldmark Choir of the Rabbinical Seminary.

We wish all our readers a truly happy Channukah! 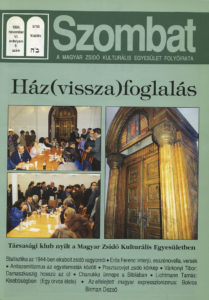