The September issue of Szombat begins with Gábor T. Szántó’ s editorial, surveying the broad spectrum of issues that need to be dealt with in the paper. These range from the problems of the Jewish Restitution Fund and financial problems faced by the various Jewish organizations, to the shamefully low standard of the Holocaust commemorations; from the elections to be held in the leadership of the Jewish Community, perhaps heralding a renewal, to the lack of a religious renaissance; and from the increasing hope for peace in the Near East to possible terrorist actions threatening the life of the Diaspora communities.

We offer a survey of the various Jewish educational institutions in Hungary. The Jewish Community has reclaimed its former school building, which needs to be renovated, but this work is hindered by a lack of funds. The directors of the Anna Frank Gymnasium, run by the Jewish Community, have again emphasized that only in an adequate building can there be hope for proper education. The Lauder Javne Community School can, at the moment, be more proud of its liberal, tolerant atmosphere, rather than of the depth of its Jewish studies, even though it must be admitted, that the pupils of the primary school surpass the students of the íirst few experimental classes, launched earlier, both in terms of their academic knowledge, and their understanding of Jewish traditions. The primary aim of the Orthodox Msoret Avot American Foundation School is to offer a curriculum and an education that is on par with that of an average Hungarian school. József Schweitzer, director of the Rabbinical Seminary, speaks of the difficulties in training good rabbis for the dispersed Hungarian communities, for the ranks of Hungarian Jewry have been decimated not only by the Holocaust, but also by the decades of the Communist dictatorship. He is also preoccupied with the problem of his successor to this post; however, in spite of the adventisement of the position in various journals, no suitable applicalions have been forthcoming, and neither are there any appropriate candidates among the currently active Hungarian rabbis.

The director of the Pedagogium, Judit Komoly, considers her main task the training of qualified religious teachers for the Jewish primary and secondary schools. Géza Komoróczy, professor of the Assyriological and Hebraic Deparment of Budapest University would like to see a Jewish altemative to all historic studies of the university, similarly to the practice in other European countries. In contrast to the insitutions, where-for the lack of trained teachers-Hebrew is taught by unqualified teachers, the teaching of Hebrew does not pose an acute problem in his department.

Chief Rabbi István Berger has died. A last farewell is bid to the outstanding scholar of Hebraic studies by his former students, Tamás Turán and the poet György Somlyó, whose translation of the Song of Songs was greatly aided by linguistic help from Rabbi Berger.

Our section on domestic issues includes a report on the opening of the Jewish Community Centre; on the welcome event that a square in Budapest has been named after Theodor Herzl, and that thenew Israeli ambassador to Hungary will soon-oceupy his post.

We have included a report on Birobidzhan, where many non-Jews declare themselves to be Jewish in the hope of acquiring an exit visa. Also, we offer a review of the reactions to the astonishing proposal by Jossi Beilin, Deputy Foreign Minister of Israel, according to which the Jews of the Diaspora should rather be concemed with their own well-being, rather than with giving aid to Israel, for assimilation is a far greater danger than the perils faced by Israel.

Ágoston Schmelovszky analyses a Mishnah on the coming Rosh Hashana and a custom practised at Sukkot.

We continue the publication of the study on the 1944 history of the Pest ghetto.

In our cultural section we have included a report on the guest performances of the Bucharest Jewish Theatre, as well as on the performanccs given by the Théatre de Complicité and the Rovat National Theatre, based on the novels of Bruno Schultz, László Marton Távolodó reviews a host of new LPs, part of the Klezmer Revival. The current issue of Szombat is illustrated by Gábor Szerényés graphics, accompanied by a study from György Szegő. And, finally, we wish our all readers a Shana Tova! 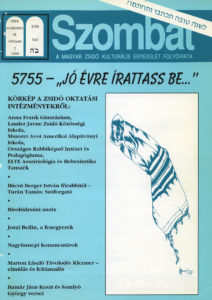