We publish the thoughts of nine young Hungarian writers we asked to talk about how they feel about Jews. The actual act of selecting “non Jewish writers” is questionable in that making such a distinction in contemporary Hungary is a highly problematic issue – claims Gábor T. Szántó in his introduction. János Háy writes about his experience of visiting the syn­agogue in Dohány utca as a stranger with his girl­friend on a Jewish holiday. “At the time when I start­ed university I thought this could not possibly be an issue, that the so called “rightists” would not be pre­sent there. I was wrong. Some people openly criti­cised Jews, gypsies, communists.”- writes Orsolya Karafiáth. István Kemény feels towards Jews the same way as one would feel when wearing a swim­suit on a nudist beach: he is very interested but is afraid to show this. Zoltán Kőrösi says: “Once an American girl looked at the picture of Antal Szerb in my room and said: He’s like my father’. He was Jewish’, I replied. – ‘He’s like my father” – she repeated. (Antal Szerb was a Hungarian writer and literary historian killed during the Shoah – the edi­tor). Gabriella Nagy in her writing “The little old lady” draws a loving picture of an elderly lady and tells a story about negative discrimination. Krisztián Peer explains how much tension there is even in an everyday conversation betweeen Jews and non Jews, and about how difficult it was for him to leam to cope with these tensions, surrounded by Jewish schoolmates. For Zoltán Poós, talking about Jews evokes the humiliations in the dormitory of his teenage years. György Szerbhorváth who was brought up in the former Yugoslavia, feels awkward about the issue of ethnic minorities: “I do not have an attitude towards Jews. To individual Jews, I do, to certain Jewish things I do, but I do not have an attitude towards Serbs or Hungarians in general, although I do actually have an attitude towards the latter: I believe to be an antinationalist Hungarian, or a Hungarian antinationalist”. János Térey quotes a relevant section from his narrative poem.

The assembly of the Budapest Jewish Community elected a new president ahead of time. Four candi­dates stood for the position, the voting was carried out in a democratic manner, but everyone kept quiet about the fact that the previous president stepped down because one of his opponents made him resign by (supposedly) taking a picture of a Christmas tree set up in his flat.

Viktória Lugosi writes about the tragicomic situa­tion that arose with this year’s Pesach matzah. The company who had been making it for years is now closed down, and the orthodox and neologue (Hungarian conservative) groups were unable to find a replacement This year matzah was sold like a rare commodity back in socialist days: it could only be purchased through acquaintances “under the counter”‘, often hidden from the eyes of other customers.

János Dési wrote a diary of his trip to Israel, fol­lowing the steps of his great-grandfather, rabbi Illés Ádler.

Historian Ágnes Gereben gave an interview to János Gadó on the occasion of the publication of her book “Antisemitism in the Soviet Union”. She mentions that so far no evidence has been found in the archives to prove what has been talked about before: in 1952, Stalin was planning the deportation of the Soviet Jewry.

“Sometimes I do not do any work for months, but when I have collected six or seven sketches, then I travel to the countryside to my studio knowing exactly what I am going to paint. By then I will have planned in my head every inch of the pictures to be painted.” – explains László Fehér, one of the inter­nationally famous contemporary Hungarian painters. His paintings from Israel are displayed in Vadnai Galéria in Budapest. 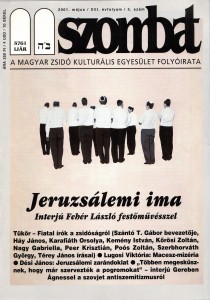