What is the reason for the apparently unprincipled atti­tude with which the leaders of the Jewish community pin the yellow star on their chest with much bravado after los­ing a lawsuit against an anti-Semitic publisher, but keep their silence on hearing of a decision concerning com­pensation that is disadvantageous to the community as a whole? – is the question posed by János Gadó. He believes that the answer is to be sought in an old com­munity tradition, namely loyalty to the establishment – a concept that the community which has lost its ideological bearing is unable to replace with a more prudent policy. The ‘product’ of this community attitude is none other than the powerful managing director who rules over the community apparatus – and especially over financial mat­ters – while pursuing a policy that conforms to momentary’ interests in all important issues.

According to historian-demographer Tamás Stark, the number of Hungarian Jewry ranges between 65 and 125 thousand. He attempts an outline of the demographic trends of post-war Jewry on the basis of all available evi­dence. Irrespective of whether one considers the minimum or the maximum number, one sad fact emerges clearly: Hungarian Jewry has shrunk to it’s half as compared to the 1945 demographic data.

“Hungary had not lost her independence in March 1944 … the tragedy would have been avoided and Hungarian Jewry would not have been murdered. Still, this does not offer any exoneration from the historical responsibility since we know that the deportation of the Jews was done with the knowledge and, often, the active cooperation of Hungarian authorities and individuals. And there were many, who closed their eyes, either because they were afraid or because they felt powerless to do any­thing, or simply because they were indifferent towards their compatriots or because they actually agreed with what happened.” These words were part of a speech given by Zoltán Pokorni, Minister of Education, on April 16 at Csurgó (a small country town) on the occasion of the state Holocaust Memorial Day. Szombat publishes the whole text of the speech.

“I am looking for the few dozens of the ‘righteous’ who can perhaps save the synagogues of Budapest” – writes Sándor Feldmájer in his appeal to encourage people to attend those synagogues – at least on the Shabbat – where the few elderly men are no longer enough to make up the minyan.

Endre T. Rózsa believes that it would be to the advan­tage of Hungarian Jewry if some of them would declare themselves to be an ethnic minority, if only because the various Jewish organizations – always lacking funds – could thus receive a share from the funds set aside for the national and ethnic minorities from the state budget.

Gábor T. Szántó’s report investigates the Jewish ceme­teries that were destroyed during the Communist dicta­torship, often with the assistance of the then Jewish com­munity leadership.

If the dream of the Zionist founding fathers was that – as a sign of normalcy – there should be Jewish thieves and murderers, this dream has been amply fulfilled. Yehuda Lahav‘s article examines Israeli crime. Although the ratio of crime has not risen – as shown by various statistics – increasing social tension has definitely contributed to a rise in aggressiveness. The author quotes the conflicts between different ethnic groups and the Israeli-Arab con­flict as the two main sources of these tensions.

In her study entitled “British Jewry – A free Market of Representation”, Lena Stanley-Clamp notes “British soci­ety, which for centuries derived strength from the peren­nial nature of its institutions, is currently engaged in con­stitutional reform, opting for devolution of power and new political structures. The Labour government’s multicul­tural agenda concerns itself also with the way the interests of ethnic minorities and other groups are represented.”

Stalin’s terror did not spare even the Jews who became his relatives is the conclusion of Miklós Kun‘s study who examined Stalin’s reign from this unique aspect.

Continuing our series, ‘Under pressure’, on the docu­ments of the “people’s democracy”, we publish two reports written in 1968 by Géza Seifert, the then president of the community, on the assemblies of the Neolog and Orthodox rabbis. The detailed reports to the State Ecclesiastic Office (the state authority to overview the activity of the religious communities) reveal that the rabbis chose their words very carefully since they knew that the authorities would be informed of their every word. For his part, Seifert exhorted the rabbis to be unconditionally loyal to the state.

In his review of István Szabó‘s film, ‘Sunshine’, Attila Novák notes “the film’s view of history is rather prob­lematic. In contrast to the Shoah, the 1950s are unsuit­able as a background to Jewish suffering, István Szabó is trying to prove that Hungarian society should again be faulted for the unsuccessfulness of the redeeming Jewish entree that the Jews were always victims of all dicta­torships. According to this view everything that had hap­pened earlier was but a station leading to the Shoah and everything that happened afterwards was a consequence of the Shoah. But the message of the film, suggesting an eternal victim, can only be accepted by viewers who are unfamiliar with Hungarian history and only the most foolhardy Jewish apologists can claim that the 1950s were anti-Semitic.” 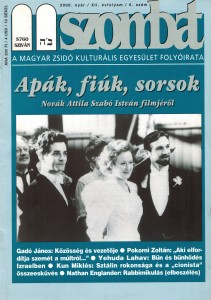