The April issue of Szombat begins with a report on the general assembly of the Federation to Maintain Jewish Culture in Hungary, the largest secular Jewish organization in Hungary; it seems that the Federation is more concerned with its own internal affairs than with cultural issues. This report is followed by a photo-reportage on the opening of the 12-class Lauder Yavne school, the First new Jewish school to be built since 1945, and a report on the general assembly of Hungarian Orthodox Jewry – although it is not entirely clear how many members this denomination numbers and who their true representatives are.

In our ’Diary’ section László Seres rails against the protracted process of compensation. We have also included an account of the Theodor Herzl memorial conference, held on the occasion of the l00th anniversary of the publication of the Judenstaat, together with a brief review of the papers read at this conference.

The ’Foreign Affairs’ section begins with an overview of the relations between Jews and blacks and the reasons for the current hostilities between these two ethnic groups in the States, followed by a report on the emergence of wealthy Jewish entrepreneurs (mostly bankers) in Russia, who are willing to put up millions of dollars in support of their community.

In our section on Israel we have focused on the political reactions to recent acts of terrorism, followed by an article that maintains that in spite of the all-pervading feeling of grief and distress, the economy continues to boom.

Also included in this issue is a genuine piece of Talmudic of reasoning on certain elements of the Seder.

In his analysis of a short story by Imre Kertész, Tamás Ungvári focuses on the present-day projections of the trauma caused by the Holocaust. We have also included a profile, written by Géza Komoróczy and Jó­zsef Schweitzer, of Professor Moshe Carmilly Weinberger on the occasion that he received the Bächer Prize; we conrinue to publish the papers read at the conference on Hungarian Jewish literature – for this issue we have chosen the paper by Béla Pomogáts, president of the Hungarian Writers’ Association, whose main conclusion is that in spite of the numerous Jewish writers there was no distinct Jewish offshoot in Hungarian literature. 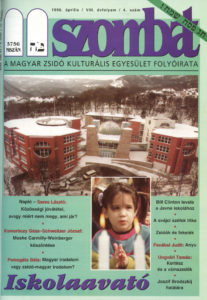 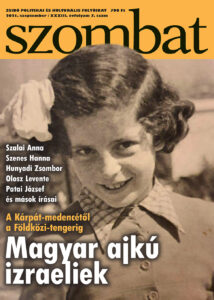