The February issue of Szombat begins with an essay by János Gadó in which he broadly reviews the mode of the Holocaust remembrances held in Hungary and analyzes the role of memory in the Jewish community’s self-perception. In 1994 the ’Congregation of Faith’ organized a series of events marking the anniversary of the Holocaust throughout Hungary. In our interview we asked them about theresponse to these, the official reaction, as well as about public opinion in general concerning the entire issue.

Emil Várai offers an overview of the depiction of Jewry in Catholic textbooks and of the reaction to, as well as the possible influence of, the series of statements issued by the Catholic Church on the necessity for a Jewish-Christian dialogue and the responsibility over the Holocaust. „Will these statements remain merely empty words?”- he asks at the end of his article.

We asked the former and current leaders of the Cultural Federation of Hungarian Jews to speak about the problems faced by the community and, alsó, of the results that have been achieved over the pást few years.

We publish the second part of the interview given by György Gadó, a former MP, who before the political changes edited a Jewish samizdat and was a prominent human rights activist.

In this months issue we have introduced a new section: „Diary”. Our first contributor to this section, Tamás Ungvári, speaks about his favourite and most beloved books.

Alsó included in this month’s issue is a report on the hopes of the Lubavits movement that the Rebbe was indeed the Messiah and will return to this earth-together with somé reactions that maintain that this hope and expectation runs counter to all things Jewish.

In his lengthy essay entitled „The Politics of Memory” Amos Elon examines how the Holocaust has shaped Israeli public consciousness, as well as how the memory of the Holocaust has been repeatedly exploited by various politicians.

In the section on Jewish tradition we have a Hassidic story, published by Yaffa Eliach, on the escape of Aron Rokeach, the Bell rabbi, whose flight from the ghetto in 1943 was in part orchestrated by Hungarians.

In his study Gyula Zeke reviews the political activity of Hungarian Jewry in the late 19th and early 20th century, as well as the general reaction to this activity.

Péter Kraszlev introduces Anri Kisilenko, a Jewish novelist living in Bulgária; we have also included one of his short stories that is set in the Jewish quarter of Sofia. Péter Sz. Nagy evokes the memory of Béla Zsolt. Born exactly one hundred years ago, Béla Zsolt, the renowned novelist and essayist, had devoted many essay and studies to the problems of Jewish self-awareness and self-perception.

György Szegő reviews a recent exhibition of contemporary Israeli painters in the Jewish Community Centre. The February issue of Szombat is illustrated by these paintings. 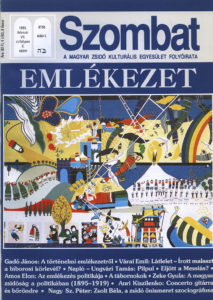