The Hungarian Jewish Heritage Fund which in accordance with the statutes – never observed – of the Paris Peace Treaty should provide restitution to the Jewish community for the Jewish properties which remained unclaimed after 1945 has still not been set up. The budget has earmarked HUF 4 billion worth of compensation coupons for Holocaust survivors which can be exchanged for a monthly annuity of about HUF 3 to 6 thousand, depending on age. The real estate properties are still under discussion, but to date the government has not disclosed anything about the art works that it promised to this fund.

In his letter to the editors of Szombat, Dr. József Horn, president and Gusztáv Zoltai, the managing derector of the Budapest Jewish Community has dismissed the allegations of unlawfulness published in our February issue. According to Mr. Korn there was no need to announce a competition for the new building of the Jewish School – funded from the State budget – since the law does not specifically prescribe this. In our reply we have quoted from earlier statements made by leaders of the Jewish Community which stated differently.

In his report Emil Várai reviews the negotiations over the Swiss deposits of the Hungarian victims of the Holocaust. From the quoted documents and statements it becomes painfully clear that the Socialist Hungarian State considered its own right to decide how much will be given to the sur­vivors from the money received from Switzerland.

Sándor Bacskai recently visited Betar, one of the religious Zionists’ ultra-modern settlements on the West Bank. Its inhabitants, suffused with idealism, maintain relatively tension-free relations with the Palestinians in the region. Our Israeli correspondent, Yehuda Lahav, offers an over­view of privatization in Israel.

Our 16 page supplement presents the art exhibition, Diaspora(and)Art, opening in March in the Jewish Museum. The supplements includes four essays on the main theme of the exhibition, as well as the reproduction of several paintings from the exhibit. 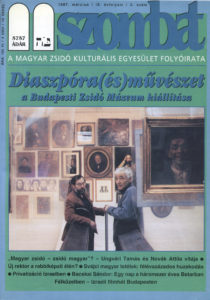