Interview with András Heisler, President of the Alliance of the Jewish Congregations of Hungary

– One year ago, you were elected president of MAZSIHISZ. The main concerns have remained unchanged: an aging membership; a political communication based on the trauma of the Holocaust; an economic activity that is not transparent for the elected officials; an institutional system inherited from the dictatorship, which is often criticised for this reason. Have there been any changes in these respects?

– I believe that I was elected president of MAZSIHISZ owing to my promise that I would present the new by-laws outlining a potential solution to these problems within a year. I will indeed do so at the General Assembly, scheduled for May 16. Every member of the assembly will receive the draft of the by-laws beforehand. The new by-laws obviously only create the possibility for changes. However, the problems mentioned in the question are no longer that critical. Following the elections, the MAZSIHISZ leadership immediately set up a committee for drafting the new by-laws, whose main task was to lay down the principles and the overall concept

– The members of the committee were chosen from the leadership, who were supposed to be under tighter control according to the new by-laws.

– I don’t see any contradiction: except for the executive director, all the elected officials – including the president of MAZSIHISZ – perform their duties as voluntary community work. One of the main points of the new, democratic by-laws is that the elected officials be able to exercise a tighter control over the administration and have greater decision-making powers.

– Has the draft been completed?

– The draft is practically complete. Two board meetings will be held before the assembly is convened; the drafting will be finalised at these meetings so that we can send a copy to every member who will attend the assembly in May. It is very important that by time the draft is presented to the assembly, it will have been approved and accepted by the leadership. The draft of the new by-laws should be suggested by the community, rather than the president.

– In an interview given about a year ago, you said that “MAZSIHISZ has tried to reach non-affiliated Jews for long years now, and has tried to find common ground with Jewish intellectuals. Our efforts have not been particularly successful. We have to contemplate the reasons for this failure.” What has been done in this respect?

– The drafting of the by-laws took up most of our time and energy, and we can thus only achieve partial results. Let me quote an example. Each year, the Jewish community of Croatia holds a meeting on one of the Adriatic islands, inviting several hundred meeting and the representatives of a country’s Jewish community. This year they invited MAZSIHISZ. Earlier, the fifty or so strong delegation would have been made up of the members of MAZSIHISZ. What we did, however, was to contact various Jewish organisations – I think there were sixteen – who were happy to accept the invitation. Another example is the draft of the new by-laws, which declares that following an agreement with MAZSIHISZ, representatives of other Jewish organisations can participate in our general assembly with consultation rights.

– How will this work in practice?

– This option will be announced and the organisations interested in this can contact us, although it is possible that we will contact them. Obviously, there is need for some sort of formal agreement in this respect, for we would prefer to exclude organisations, whose outlook differs markedly, from participating in MAZSIHISZ’s work. There is need for some sort of screening, although this will not debar organisations such as the Federation to Maintain Jewish Culture in Hungary, the Zionist Alliance or B’nai B’rith.

– One persistent problem is the lack of a co-ordinating forum, where Jewish organisations can discuss the problems affecting them all. The initiative outlined above does not point in this direction.

– This is indeed so. I mentioned the meeting in Croatia because during their visit, the Hungarian Jewish organisations will have ample opportunity to consult with each other separately for several days.

– Do the by-laws mention a co-ordinating forum of this type?

– When drafting the by-laws, we had to choose between two options. One would have meant that MAZSIHISZ functions as an umbrella organisation, accepting all the other ones, whether organised along cultural, religious or other lines. The other option was that MAZSIHISZ remains a religious organisation and only various congregations can become its members. There were serious debates over this and in the end we chose the latter option.

– At present, MAZSIHISZ alone represents Hungarian Jewry in Hungarian public life – mostly on the basis of an evolved practice – at least as regards contact and negotiations with the government. In other words, there has been no progress in creating a co-ordinating forum.

– Well, you can hardly hope to solve all the problems in the first year of a four-year period. I feel it is very important that the new by-laws be drafted by May. The new by-laws definitely support co-ordinating and pooling efforts.

– The Sim Shalom reform congregation is a religious group – why is it excluded from membership in MAZSIHISZ?

– According to the currently effective by-laws, member organisations must conform to certain criteria. One of these is that thy must follow the Shulchan Aruch. This is a religious issue – the decision lies with our rabbis and they have confirmed in writing that the Sim Shalom congregation does not follow the rulings of the Shulchan Aruch. As a secular leader, I am obliged to accept our rabbis’ religious ruling, for were I to disregard this, there would be a terrible chaos.

– Are you quite certain that every member congregation is based on the Shulchan Aruch?

– The behaviour of individual persons is irrelevant. The members of MAZSIHISZ are the congregations, and thus the important point is whether their religious practice follows the Shulchan Aruch. This point was also debated when drafting the new by-laws, and we finally decided to include this point.

– Earlier presidents often complained that they have no general overview of financial issues and decision-making. What are your experiences?

– They were wrong to merely complain, they should have done something about it. As I have already mentioned, the new by-laws also regulate financial decision-making, meaning that the leadership and the general assembly will have a better understanding into the budget.

– What are your personal experiences in this respect during the past one year?

– It is my belief that the president should create an effective and efficient system and to provide the necessary guarantees. This is why I prefer not participate in the work of the committees evaluating tenders, although I believe it is my duty to ensure public procurement for various projects. It must also be pointed out that most of the investment projects during the past period involved public procurement.

– What is the current situation? Do you have access to the information concerning financial decisions?

– I feel that I am at beginning to understand the system’s logic – and, in some cases, the lack of any logic. I believe it is the president’s duty to elaborate the appropriate guidelines, so that he does not have to interfere with operative issues. To quote one example: the overall final balance for 2003 obviously differed slightly from the budget originally approved by the general assembly, but this difference has to be kept within certain limits. However, this was not the case with individual items in the budget. I believe that the basic problem is that we are not informed when these differences become obvious during the year. Once you have created a logical system, you have the whole system under control.

– Let us proceed to another issue. MAZSIHISZ’s communication to the non-Jewish world is often very outdated: the Holocaust is a kind of reference point and you very rarely seem to reflect on the point that sixty years have elapsed since then.

– I believe that there has been some improvement in this respect: our communication is less as hoc in nature and less hysterical. One good example is how we reacted to the exhibition glorifying the Arrow-Cross* organised in Koszeg: first we responded rather furiously, but later we consciously chose to remain in the background, we did not issue any statements and let historians voice their critique – and using this professional critique, we managed to have the exhibition closed down. The other good example is Gibson’s film, The Passion of the Christ, in which case we again consciously decided not to make any public statements and let any critique be voiced by film critics and historians. In retrospect, I believe this was a good decision because there was no hysteria surrounding the film as in other countries. However, these are but two specific examples – we have still not taken any steps as regards conscious PR work.

– New forms of anti-Semitism have appeared in public discourse. Have you consulted with Western European Jewish leaders and professionals, who have more experience in this field?

– We participate in the work of several international Jewish organisations and on conferences focusing on this issue. We try to make use of their experiences in our work, although every country’s anti-Semitism has its own, national characteristics so to say. Islamic anti-Semitism in France can hardly be compared to the anti-Semitic tradition in Hungary.

– Aside from participating in these international conferences, has MAZSIHISZ made any initiatives in this respect?

– Although this was not our initiative, the European Jewish Congress recently held a conference focusing on this subject, which we attended, and we obviously try to make use of what we heard there. One important change, reflected in the by-laws, is the introduction of a new element in the internal work of MAZSIHISZ: anyone participating in an international conference is now obliged to prepare a written report for the leadership. The lack of these reports was badly missed during the past twelve years.

– My greatest achievement is that I have been able to keep my promise made to general assembly last year and to present the draft of the new by-laws in May. The most serious result is that this draft, which stepped on a great many toes and provoked countless debates and emotional outbursts, did not cause an internal conflict in the community. As regards your other question: we have made no advances in our PR work and establishing serious contact with other Jewish organisations is much slower than I would have preferred. 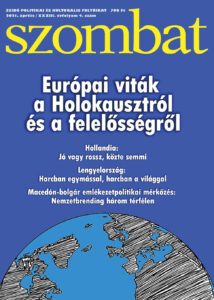