The May issue of Szombat begins with an essay by Gershom Scholem, “Israel and the Diaspora”, which is also intended as a tribute to Jom Ha-Atzmaut, that was celebrated at the end of April. With this essay we hope to draw the attention of the Jewish community to a problem that resurfaces time and time again, namely the need to create an active, organic link with Eretz, which is vital for those of us living in the Galuth. We feel that this essay, originally published in 1969, has lost none of its freshness or timeliness, and it is to be regretted that with the gradual fading of a generation, that was definitely no stranger to existence in the Galuth, this experience and relation seems to have lost its importance and urgency to the newer Israeli generations, which might have fateful consequences for the Galuth too.

We have devoted a lengthy report on the events of the Day of Jewish Culture organized by the Federation to Maintain Jewish Culture in Hungary. One outstanding event was the Szombat Saloon, in which renowned writers and essayist acquainted us with their new writings. We have also included a detailed description of the occasionally conflicting views that surfaced in the course of a round-table talk on the image of Jews as portrayed in various contemporary textbooks between experts from the Ministry of Culture and the representatives of various Jewish schools.

Further writings include a report on the election campaign preceding the election of Russia’s new chief rabbi, Adolph Shayevich, a graduate of the Rabbinical Seminary in Budapest, and the relevant issues of this campaign, namely whether the new chief rabbi should be home-grown or imported, how should the relation to Israel be defined, etc. An interview with Neil Kozodoy, the editor-in-chief of Commentary, focuses mainly on the situation of American Jewry.

The supplement of our May issue deals with various – often little known or downright misunderstood – aspects of sexuality in the Jewish tradition, in the hope of dissipating misconceptions affecting a highly important, intimate sphere of our lives.

This month’s issue is illustrated by the drawings of György Láng, the Hungarian Jewish writer, composer and painter who died a decade ago; these illustrations were originally prepared for his Hanele, a novel set in a small Carpathian village; they provide, at the same time, an excellent source of documentation of the one-time, but long vanished ethnographic milieu. 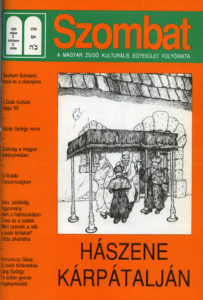