The world has recently celebrated the end of World War 2 and the fall of Fascism. In his essay, “Falling stars”, Attila Novák writes about the victims of Communist dictatorships and the responsibility of the Soviet Union. “The main problem is that the joy of May 9 is clouded by what happened later. The post-Soviet leadership is unwilling to assume any responsibility for subsequent events, and there is not one word about the financial and moral recompensation of the victims. Still, what can we expect from a country, which has failed to account for its actions to its own citizens, let alone others – the only joy of the Gulag survivors is that they have lived to see the fall of the Socialist dictatorship.”

This month’s issue includes the full text of Prime Minister Ferenc Gyurcsány’s speech in Auschwitz on May 5, on the occasion of the March of the Living. “Anyone denying Auschwitz does not simply deny Holocaust, but denies also the future. Let us protect this future, protect our children and protect our humanity. Standing before you is a penitent and grieving compatriot of yours, a Hungarian survivor, a European survivor, who bows his head before Hungarians, Europeans. Hungarian and European Jews. And before the memory of your and our own beloved…”

László Seres has contributed an article on the Armenian genocide. “One and a half million people – this is the figure known to us today. Armenian men, women and children, who were consciously, systematically massacred as part of a gigantic pogrom between 1915 and 1918, or rather 1922, on the orders of the Turkish gov­ernment or at least with its unequivocal approval with the purpose of ethnic cleansing.

György Vári describes the grave crisis of Hungarian Jewry. The young talented literary historian believes that the search for a Jewish partner is absurd if motivated by fear of anti-Semitism. He also crit­icises certain representatives of various Jewish religious movements who participated in the debate held in spring, 2005.

Also included in this month’s issue is a conversation with Arnon Grünberg. “I have always been attracted to Camus’ absurdism. And I am still attracted. I see something heroic in loneliness and sense­lessness,” says the acclaimed Dutch writer. The interview is fol­lowed by his description of a visit to Cisjordan.

Tamás Halász provides an account of his visit to Tunis. “Traces of the dwindling community can perhaps only be easily found in Djerba. Still, there is always the excitement of the search for small signs, with which the one-time greatness of Tunisian Jewry can be visualised. The single genuine relic is the great synagogue in the cap­ital, which can be easily found once you get hold of a map.” 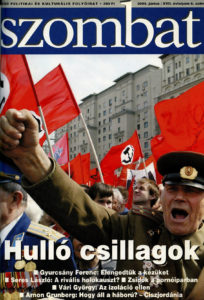