“Hungarian Jewish historiography has since long become extinct. We have talented historians, excellent books and arti­cles are published from time to time, but – owing to subjective and objective causes – we can hardly speak of directions or schools or of concepts”, is the claim made by Attila Novák in his essay on this subject.

“Most photos of stone-throwing Palestinian youngsters were made not by Western journalists, but by other Palestinians, who were given cameras and video equipment by major Western tele­vision companies” said David Admon, the new Israeli ambas­sador to Hungary, in the interview given to Szombat.

In our section on World Affairs, Ildikó Eperjesi describes a dis­turbing report prepared by the Israeli Ministry of Foreign Affairs, which claims that “Israel could face isolation comparable to the one suffered by South Africa during the decades of apartheid pol­icy. The report also claims that one new form of European anti- Semitism is challenging the Jewish right to an independent state. ”

“Hungarian culture became inestimably poorer with the loss of the many artists, scholars, writers and erudite men and women murdered during the Holocaust. A gaping wound has since long marred Hungarian culture. ” These are the words of Cardinal Péter Erdő, head of the Hungarian Catholic Church at the opening of the exhibition, “The Holocaust in Art”. His speech is published in Szombat.

“I have recognisable Jewish roots in every dimension ”, said Miklós Haraszti. OSCE representative of Freedom of the Media, who followed the rather characteristic path of Jewish intellectuals – following a brief detour to the extreme left, he was part of the democratic opposition from the early 1970s, becoming a liberal MP after 1990, when one of his main priori­ties was to counter the efforts of the extreme right. From 1994, Haraszti has lectured at various American universities.

Our media review section contains a critique of an article pub­lished in Magyar Nemzet, a right-wing daily (November 29, 2004). The article in question describes how Israeli soldiers killed a Palestinian doctor in his own home. “Interestingly enough, the journalist failed to mention that the doctor in ques­tion was an alleged terrorist. … His main point was that the vic­tim was a doctor, the idea being to re-affirm the fact’ of Israeli brutality,” notes our commentator. This month’s section includes a description of the homepage of the extremist Left- Wing Front, which in spite of its professed atheism and anti­clericalism, recommends a number of Islamic and Islamist links. It supports the “Afghan people’s freedom Fight” – i.e. the return of the fanatical Taliban to power, without mentioning the atroc­ities committed by them. Iraqi beheading squads and bombers who have murdered a number of Iraqi civilians and members of Western aid organisations are called freedom fighters. It is thus hardly surprising that their heroes of the Left-Wing Front are Marwan Barguthi and Yasser Arafat.

This month’s issue also contains a translation of Yeshayahu Leibowitz’s essay, “The Jew in His Community, on His Land and in the World”. 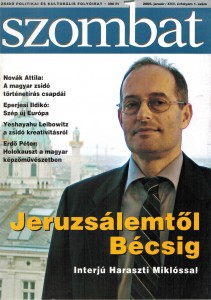