“It is the hope of the Hungarian government that President Arafat’s historic ambitions will be fulfilled in the not too distant future” said Ferenc Gyurcsány, Hungary’s Prime Minister after Arafat’s death. “What kind of ambitions? More dead Jews in Israeli cafes and shopping centres? A Greater Palestine extending from the Mediterranean to Jerusalem?” – asks László Seres in this month’s editorial, offering an overview of statements about Arafat by Hungarian politicians.

Our section on media affairs is devoted to the Arafat obituaries in the Hungarian press. The one by the correspondent of Hungarian Radio can be regarded as quite typical. “Arafat eventually realised that he would be able to achieve more through political manoeu­vring; however, following the Oslo Accord, his ability to compro­mise weakened.” It seems to us that this is a very polite way of describing the second intifada launched in autumn. 2002, and the countless Jews and Arabs who were wounded or lost their lives.

In his essay on Israeli home affairs, László Bányai analyses Prime Minister Ariel Sharon’s difficult situation, who now finds himself in a minority position in his own party after proposing his Gaza disengagement plan. The plan itself only received the neces­sary votes with support from left-wing MPs.

Editor-in-Chief Gábor T. Szántó has been engaged in a long debate with renowned writer István Eörsi in Élet és Irodalom, a leading literary magazine. At one point, Eörsi characterised Szombat as a Jewish paper “in which the blood libel is treated on par with the accusation that Israeli soldiers have killed Arab chil­dren 6 and it can therefore be regarded as nationalist in the most brutal, war-like sense of the word.“ In his reply (which was reject­ed by Élet és Irodalom, and is therefore published here), Szántó pointed out that “Hungarian nationalism and fundamentalist exclusion owing to his Jewishness during his childhood made a lasting impact on Eörsi’s life. Eörsi’s fury, however, is directed not only against the direct cause of his suffering – the one-time and the contemporary nationalists – but also against his own Jewishness, the ‘indirect cause’ of his suffering, and the reason for the loss of many of his relatives. ”

Literary historian Katalin Pécsi has contributed a piece on the winner of this year’s literary Nobel Prize, entitled “Aberrated and provocative? Elfriede Jelinek: the first feminist to win the Nobel Prize”, in which she asks whether Jelinek’s “masculine” or assertive attitude and political commitment can to some extent per­haps be attributed to the “Jewish female voice”. She quotes an interesting point made by Professor Louise Vasvári: the first femi­nist scholars in New York in the 1970s happened to be Jewish – their assertiveness, their intensity and their self-confidence was regarded as a “Jewish trait”, setting them apart from the other women in academe.

Replying to an article in our November issue claiming that the leaders of the Jewish community tend to react hysterically and without any concept to right-wing action, András Heisler, President of the Federation of Jewish Communities in Hungary, criticised Attila Novák, author of the article in question. Heisler lists a series of recent decisions, which reflect a well thought out and realistic concept. In his reply, Attila Novak acknowledges that the president has done much for democratising the federation. However, as regards a conscious strategy, he wryly notes that “I would gladly believe that a strategy exists, but there is no informa­tion whatsoever as regards this strategy. What we have instead are the statements made by the managing director.”

Szombat invited Ágnes Heller and György Tatár, two renowned philosophers, to a round table discussion. Two excerpts: Ágnes Heller: “I do not resent that the Palestinians hate Israel, seeing that they are enemies. What I do resent is that people in Europe tend to think as if they too were Palestinians. ” György Tatár: “I believe that people obsessed with political correctness speak a jargon which is not unlike the Marxist-Leninist vocabulary. It was possible to say the truth using this lingo, but the vocabulary itself was untruthful, meaning that it was impossible to express impor­tant and clear-cut truths, no matter how hard one tried. ” 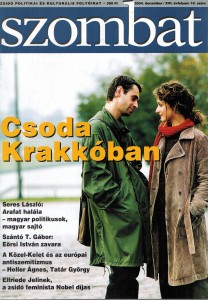