This month’s issue of Szombat focuses on the Budapest Holocaust Museum scheduled to open in April. The Mazsihisz (Alliance of Jewish Communities in Hungary) offered an out of use synagogue for this purpose, but later the building was renovated in it’s original form which made it not suitable for being used as a museum. At the same time the renovated build­ing will not be used as a synagogue because a separate room has been set aside for this purpose. The 1700 million forints (around 8.1 million US$) worth investment produced a memo­rial place and an exhibition hall of 650 square meters. How could this situation have possibly occurred?

How much has Hungarian society managed to deal with the memory of the Holocaust – phrases the question Szilvia Peremiczky. „The country is in this respect similar to Western countries in the 1950s” – answered one of the people asked. Vera Anna Békés looked at how psychologists in the last 50 years have tried to describe the symptoms produced by the horrors of Holocaust.

Rabbi Dov Levy’s writing for the Holocaust Memorial Day examines what explanation and comfort can be given by ancient Jewish sources.

In our literature section we deal with Nobel laureate Imre Kertész’s works about the Holocaust. Márton Csáki assesses his books and the books written about his works.

László Bányai wrote about the trial at the Hague Court about the security fence built by Israel. Bányai believes that the chances of an unbiased decision are slim, because the court allows representatives of not only the Arab League but also those of the Islamic Conference to appear as witnesses.

In „A New Wailing Wall” László Seres discusses the dis­torted views presented by the international media on the fence.

In our „Media Under Scrutiny” section we point out biased views in the Hungarian media in relation to Israel. An exam­ple: in his article Oszkár Füzes – Népszabadság daily’s corre­spondent in Brussels – says that Ariel Sharon and Yasser Arafat are nothing but “two bloody-handed old men whose only aim in life is to kill each other, and it looks like they do no want peace at all, whatever they claim.” 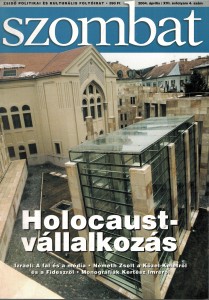