This month’s issue focuses on the lighting of Chanukkah candles in public places. This was started several years ago by activists of the Chabad Lubavits movement, and it provoked – though only a few years later – the reaction of the radical right wing, which regarded this as an act of Jewish pushiness”, and decided to set up wooden crosses next to the Chanukkias. Attila Novák asked some of the activists of the Jewish community if they thought that cele­brating Chanukkah in public places was a good idea in Hungary (where this did not use to be done traditionally), and about their thoughts on the aggressive reactions.

In our World section we try to assess the 25 years of the papacy of Pope John Paul II, from a Jewish perspective. In this section we also examine how Gianfranco Fini, leader of the radical right wing Alleanza Nazionale party arrived from post-fascism to the refusal of anti- Semitism (and anti-Zionism).

„Strikes and Terror – All the Rest is Fine” is the title of Eva Amichay‘s article on the state of the Israeli economy. “Since 11 September 2001 there has been an increased demand for young people who have done their military ser­vice. Someone who is familiar with the techniques of the Israeli Defense Forces will do well in the Field of computing anywhere in the world – she writes.” Another article in our Israel section discusses the cultural integration of Russian speaking immigrants in Israel.

In „Searching for Ancestors: Martin Buber and the Jewish intelligentsia of Central Europe at the turn of the century” Brigitta Eszter Gantner writes: “In those days being Jewish in Eastern Europe meant something archaic, archetypically Jewish – yet with the strengthening of Zionism and of the Jewish national concept, their image was slowly changing. Followers of nationalism found that the Jewish community in Eastern Europe seemed to possess all the attributes of a ‘nation’: they had their own culture, language, community, and a sort of ‘Volksgeist’. The ide­alization of Eastern European Jews was signifi­cantly affected by the new ‘Volkisch’ (national) trend in German intellectual life originating from the neo-romanticism of the turn of the century. The Hasidic stories published and re-arranged by Martin Buber – and they had a major role in romanticizing Eastern European Jews – must be seen in this intellectual framework.

Pál Várnai interviewed Pál Bárdos, author of several novels, mostly about the Holocaust. This is how he remembers his childhood: ,,Nobody was hurting me, yet distinction was a matter of course. I was accepted as a young shepherd, but my brother, who often fell ill, was referred to as a Jewboy”, no harm intend­ed though. On our return from the concentra­tion camp I was shocked to experience anti-Semitism in Makó, my hometown. Before, those peasants did not want us to die, but when we were back they were not happy about our being alive, and our things were stolen. “

Zsófia Rick interviewed Miklós Fenyő, one of the legendary rock singers in Hungary. The singer said: “To achieve success you need to have a fanatical love for the rock-and-roll feeling, for performing, for the stage, for the whole lifestyle, the essence of which is freedom and being cool, being cheeky, sexy, and having a (positive) provocative attitude.” 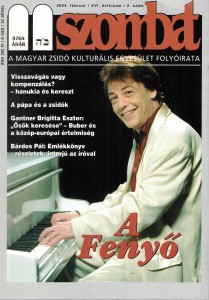