This month we publish a selection of writ­ings on neo-conservatism, which has become influential in the United States while in Hungary so far it has only been discussed in a leftist (and in an extreme right wing) interpre­tation. In his introduction László Seres puts it this way: “it has been evoked by three phe­nomena: the crisis and fakeness of (extreme) leftist anticulture; the fact that the traditional political right has become out of date; and the post-Vietnam paralysis of American foreign politics.” András Lánczi philosopher intro­duces the spiritual ancestors of neo-conserva­tives: “neoconservatives were not attracted to religious fundamentalism, instead philosophy became important, those thoughts of modem political philosophy in particular which ques­tioned modernity. As for their roots, neocon­servatives have a philosophical bias, although most of its representatives are not actual philosophers, but people who have worked in the field of social sciences or journalism.” We have selected some pieces by the “classic authors” of the movement – Irving Kristol and Norman Podhoretz. In another article “Neoconservative foreign politics and Israel”- János Gadó claims: “It is only the neoconservative way of thinking which is capable of taking Israel for what it actually is: a country strug­gling to survive while the surrounding Arabic world refuses to accept its existence. At the same time the so-called ‘progressive’ European thinkers look at Israel through the distorting mirror of their own tempers and ideological constructions. “ Attila Novák tried to find out what roots these American born thoughts could find here in Hungary, where „anachronistic left-wing traditions spread as a reaction to the increasing anti-Semitism on the political right: ‘aufklärism’, the emptiness of being a ‘citizen of the world’, the rigid refusal of religious traditions, or the revolutionary spir­it which is always ready to free further – real or constructed groups.“

„Wounds caused by trauma can be healed”- is an article on how KÚT (Fountain), a psychotherapeutic workshop operates. KÚT aims to help – if necessary through more than one generation – those who suffer from the trauma of the Holocaust.

In 1985 Chava and Joseph Lusztig decid­ed to establish the Memorial Museum of Hungarian Speaking Jewry in the Israeli town of Tsfat. The founders of the museum told Szombat about the key role this institution plays in getting Israeli people know about the history of Hungarian Jews.

Viktor Karády sociologist wrote a detailed assessment of a sociological survey. Szombat has already published a short summary of this study – “Jews in today’s Hungary” – by András Kovács.

We publish parts of András Rónai’s mem­oirs. The actor – born in Budapest in 1932 – first appeared on stage at the age of ten, and played in a Hungarian film in 1945. Since 1949 he has been living in Israel where he was the leading actor of the national Theatre (Habima) through many years. 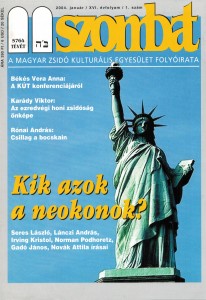 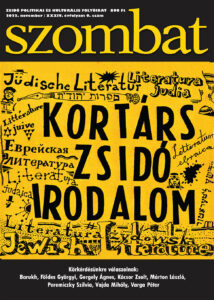