Our November issue contains a study by Robert Wistrich – with the introduction of Ferenc Erős psychologist – on the relation­ship of Sigmund Freud and the Jews.

The young activists at the Haver Foundation are going round schools in Budapest to talk about Jewish traditions and the Holocaust. “We have had very mixed experience”- explained Zsuzsa Fritz, one of the active members of the foundation. ..After an initial dislike towards us, sometimes we would manage to hold the attention of a whole class of boys, and they would then lis­ten to us quietly. Yet other times we felt like running away.”

The assembly of the Conference of European Orthodox Rabbis and Religious Leaders was held in Budapest in September. We report on the most important events of this meeting.

Jacques Derrida French philosopher, coming from a family of Sephardic Jews in Algeria, visited Israel in May. We publish a translation of an abridged version of the interview he gave to the Israeli press.

We print parts of Márton Karinthy’s book “Ördöggörcs (Utazás Karinthyába)“ (Devil’s cramp – A Journey to Karinthyland), to be published for the winter book fair. It is a his­tory of the author’s family: his father (Ferenc Karinthy), his grandfather (Frigyes Karinthy), and the sad story of his uncle (Gábor Karinthy). We chose a passage where mem­bers and friends share their memories with us of this famous Hungarian family of writers.

„Should we not be able to reorganize the official Jewish community in a way that it is based on voluntary work and mutual respect, then the community itself may break up into small groups in the future.” – writes Péter Feldmájer, chairman of the Federation to Maintain Jewish Culture in Hungary.

An article by János Gadó examines the background of the Anti Defamation League decorating Italian Prime Minister Silvio Berlusconi. Berlusconi openly supports Israel and criticizes – often with harsh words – the Islamic world. Unlike heads of government of the political center-left in Europe, Berlusconi considers the expanding of Islam as a civilization challenge and regards the spread of Islamic fundamentalism as a threat. And in this respect he shares the views of many Jewish leaders and Israeli politicians.

In our Esther’s Bag section Szilvia Holló historian quotes from the memoirs of the famous Hungarian born scientist, Leó Szilárd‘s mother. Part of this section is an interview by Katalin Pécsi with Israeli author Yehudit Rotem, whose book she recently published a review of. 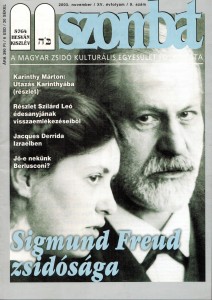