This month’s issue of Szombat starts with a study by Jonathan Webber, “How transna­tional is the modern diaspora?”

István Szilágyi‘s “The Holocaust for homework” reports on the author’s visits to three secondary schools to see how they celebrate the Holocaust memorial day.

Dov Levy, the first modern orthodox rabbi in Hungary was given his rabbi’s diplome recently. In an interview on this occasion he told Szombat: “It is very important to syn­chronize the Knowledge women have: it is unacceptable to let them lose the informa­tion they have about Jewish culture, while they are so well informed about worldly sub­jects. And as for the mitzvot, Rabbeinu Tam, grandson of Rashi had already announced: although women are exempt of regular mitzvot they may, if they wish to, undertake more mitzvot.”

Our Esther’s Bag section dealing with women’s issues, this month publishes an interview on the topic of „male films – female films” with a man for the first time: Miklós Hadas is one of the most well-known researcher of the gender studies. He found that „the depiction of European male char­acters has been changing. The traditional aggressive, authoritarian, macho behavior is much more strongly present in successful American films. In the European, highly cul­tural representation of men is more decon­structed’, fragile, and they are typically shown in contexts where their being differ­ent is in focus.”

Patrícia Margit‘s article ,,Snapshot from the territories” discusses the motivation of people moving to live in the settlements: some out of religious fervor, others with the hope of economic success”.

Our „World” section talks about how the anti-Semitic attitude of local Arabs in Antwerp has caused a significant part of the orthodox Jewish community there to vote the extreme right ‘Flemish Block’ movement.

András Kern one of the most popular actors in Hungary speaks about „the socialist era” in an interview. „Some plays were not allowed to be shown on stage, but that was not so terrible. It was more important that culture worked as a sort of valve. First of all there was only one television channel, show­ing television drama. There is no such a genre any more…For forty years we were able to play more valuable things, but per­haps this was only one of the ‘faults’ of socialism”. It was a fortunate one though. A fault that provided work for those who took part in it (colleagues working at the televi­sion, cameramen, actors, composers, photographers, stage and costume designers.” 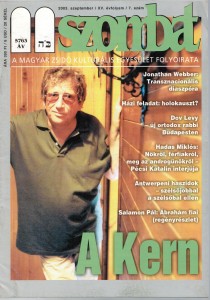