„The deportation of Hungarian Jews started in April of 1944, this is why our April issue is dedicated to the memory of the Holocaust.

Ágnes Peresztegi sums up what has been done so far for the compensation of Hungarian Jews. Her lecture, titled „Historical Commissions of Inquiry – Confronting History” was delivered at a conference in Jerusalem in the Yad Vashem Institute. In the introduction she writes: „/ will attempt to give a short sum­mary of the historical and political background of Hungary’s participation in the Holocaust and the refusal of the Hungarian government to face its past, and I will also talk about the his­torical and political preconditions of the Hungarian Jewish community’s failure to pres­sure the Hungarian Government to establish a historical commission. “

János Gadó‘s investigative article examines matters relating to the future Holocaust Museum in Budapest. Back in 1990 the year of political transformation, a group of Holocaust survivors set up a private foundation for this purpose. „That was 13 years ago, and April 2005 is said to be the earliest possible date for the exhibition to open. Constructions started 6 months ago, but the exhibition’s scenario is not written yet. Apparently it will have taken 15 years (at least) for representatives of Holocaust- survivors, for the leaders of the Hungarian Jewish community and those of Hungary’s political life, for historians and scientists in related fields to overcome all obstacles in set­ting up this museum”.

Szombat is the first to publish the Hungarian translation of Megillat HaShoah, a Scroll of the Holocaust, to be read on Yom HaShoah. The Megilla, written in Hebrew by Prof. Avigdor Shinan was read for the first time at the Schechter Institute of Jewish Studies in Jerusalem and a number of Jerusalem syna­gogues on Yom HaShoah 5762 (2002). It will be published in a booklet together with the English translation by Yom HaShoah 5765 (2003).

György Konrád, one of the best known Hungarian-Jewish writers, former president of PEN Club, president of the Academy of Arts of Berlin-Brandenburg, is 70 years old. At the age of eleven he escaped deportation in the last minute. Jews were loyal to the country’s lead­ers of the time and to the nation state, but they perhaps would not have been as meek had they known what was going to happen. Maybe more people would have tried to escape. There were all sorts of opportunities for this, or at least for helping the young get away… Escaping is a type of resistance. It means taking our lives out of the hands of those who want to kill us. It is a virtuous deed to help escape, to rescue one’s offspring. It is virtuous, more virtuous than obedience.” We publish an interview with and an essay by the writer in the section cele­brating Mr Konrád on his birthday.

In „Collective negation and the Memory of the War” Gretchen Schafft German author studies how different groups of people try to forget those periods of their history which only evoke shame instead of pride. The author examines a series of public memorials – main­ly in Germany – to see how much they clarify or confuse the historical knowledge of the observers.

„Passover Haggadah” by Elie Wiesel evokes the memory of the Holocaust and of Pesach.

An exhibition of wooden sculptures of Purim by András Böröcz is open at the Jewish Museum in Budapest. We report on the exhibi­tion and publish photos of the artist’s sculp­tures related on Purim and the Holocaust. 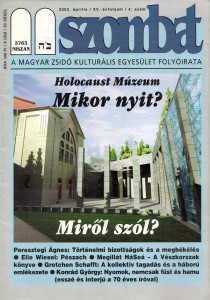