This month’s editorial by Dan Ofry Israeli author offers an assessment of the situation in the Middle East. Pondering over Israel’s possible reac­tion to current events he sums up the words of the Israeli minister of defense:

The American military campaign in Iraq is not going to be our war and we do not intend to get involved in it in any way;

Before the next scheduled assembly of the Official Jewish Community, Szombat’s editors asked 18 Jewish leaders about the life of the com­munity, about its political representation and the most important tasks to be dealt with. We have received three answers. Our commentary states: „Although each community has a leader of the sort it deserves, we believe that the Jewish community in Hungary would deserve better leaders than its present ones. The community should be led by wor­thier people who guarantee a purer, more transpar­ent and more democratic community life, and an effective representation of Jewish values and inter­ests, a respect for the living and the dead.”

Patrícia Margit publishes a report on the renaissance of and old orthodox synagogue in Budapest. A group of some 20-30 young (mostly under 35 years old) people are trying to revive one time traditions in the synagogue now named the „Pesti Shul”.

Our women’s section, Esther’s bag offers two articles this month: a travel report by the editors of the section about their visit to the Jewish com­munity on the island of Jerba in Morocco. There are fewer and fewer young people on the island, many people have joined the Jerba diaspora in Paris or in Israel” – claims the author. Katalin Pécsi interviewed Rimma Dalos poet. She was born in Russia and at the university of Moscow she met her future husband, György Dalos, Hungarian writer. She followed him to Hungary and this way got to know the life of Hungarian Jews.

In our World section we publish a report on the life of the Jewish community in Wuppertal, a town in north Germany. The two thousand Jews living there today are all immigrants from the countries of the former Soviet Union. The whole community and their rabbi are looking for their place in their new homeland.

Our current issue offers an overview on Shmuel Yosef Agnon, a classical author of the modern Hebrew literature. Márton Csáki analyses on of his novel, recently published in Hungary. His address, delivered in Stockholm, in 1966, after receiving the Nobel Prize and one of his a short stories are brought out by Szombat in Hungarian.

An interview can be read with László Kabos, one of the most popular Hungarian comedians. He started his career as a comedian on his return from the Mauthausen concentration camp. He has never hidden the fact that he is Jewish, and this has never been an obstacle for him. „They loved me, the person who I was“ – he claims.

We congratulate Randolph L. Braham on his 80th birthday. Mr Braham’s works offer a thorough analysis of the history of the Hungarian Holocaust. “It is highly unlikely that in the near future any­body can outdo the importance of his work” – claims the author of the article. 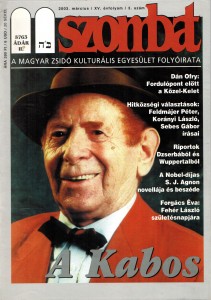