This month we publish a special supplement about the works of Imre Kertész, a Jewish Hungarian writer, this year’s Nobel prize-win­ning author.

“He feels hurt when referred to as a “Hungarian writer” by one of his critics: ‘Obviously because I am not one.’ – he com­ments. Despite writing in Hungarian he will always remain a stranger: ‘My strangeness lies in my being Jewish’. Yet, is it only in Hungary that he is a stranger?” – Pál Várnai highlights the writer’s never changing attitude of an out­sider.

“Auschwitz cannot be depicted. Imre Kertész claims that just a precise description of facts is worth nothing, facts do not show what Auschwitz was really like. Mr Kertész’s novels are organized by the desire to testify, but not in a documental sense.” – these are the first words of György Vári‘s essay.

“In Kaddish Kertész is only lamenting over the plan of not wanting to have children. The main character of this novel is writing his con­fessions, and he is, as a writer completing his task, his vocation. Writing, creation is a docu­ment of extending the length of survival: breed­ing the act of engendering. Thus the writer makes use of the power of art to extend and multiply himself, this way in creative work, he finds a chance for staying alive.” – Nelli Koltai sums up Kertész’s novel, “Kaddish for an Unborn Child”.

Extreme rightwing, anti-Semitic materials can be sold unlimited across Hungary, especially the “classic” anti-Semitic literature from the period between the two World Wars. Why have all attempts to change this situation failed so far? – Márton Csáki reports.

The latest board meeting of the Hungarian Jewish Heritage Fund focused on property issues. The Foundation was set up to handle the state’s compensation of material losses Jews suffered through the Holocaust. Ten prop­erties were returned to the Foundation so far, most of which cannot be made use of.

In our women’s column, Esther’s Bag, Katalin Pécsi talks with Louise Vasvári, professor of Stony Brook University in New York, under the title: “Women’s culture is different from men’s – or: What has feminist linguistics achieved?” In another article of this section we find out about the life of Jewish women living in Mexico, who are trying to find a balance between the coun­try’s patriarchal traditions and the more up-to- date values of their own community.

We publish a report from one of Budapest’s Jewish bookshops.

Andrea Pető’s report from Yerevan evokes the genocide of 1915. “This genocide cannot be classified as past, there are still families searching for lost members. Even though Turks are trying to start talks, claiming that what has passed should be forgotten about. Something which Turks still deny to have happened, can’t have possibly become a thing from the past.”

In our literature section we publish a short story by Markas Zingeris, a Lithuanian Jewish writer. 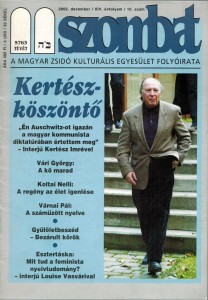