Gábor T. Szántó wrote about this year’s Nobel prize winning writer, Imre Kertész: „Kertész claims, with his merciless sense of reality, that Auschwitz is an integral part of his­tory, it was a manmade tragedy, it was not an exception, a derailment, but more of a rule.”

„Cemetery rhapsody” describes an incident where the leader of a Jewish cemetery turns away a rabbi in a harsh manner when this latter asks him to be the tenth person needed for reciting the Kaddish.

Ten-year-old students of a Jewish elementary school in Budapest were dispersed in 1944. 58 years later they got together again, as respect­ed scientists, writers, university professors. Ágnes Galambos reports about this meeting.

Our section on women’s issues, Esther’s Bag, covers Viktória Lugosi’s book Ajvé, (Oy veh, in English) about the world from a little girl’s perspective. An interview with Kinga Fabó poet tries to find out if there really is a typical women’s genre in literature.

Professor Cvi Gitelman’s essay on “Jews in Today’s Russia and the Ukraine” describes con­tradictory trends. Along with the demographic drop accompanying the emigrations, a significant network of Jewish education was estab­lished. „Amazingly, in the Russian government before the crash of August 1998, there was a disproportionate number of high-ranking Jews. Whether by acddent or not, there are few if any visible Jews in Putin’s government or entourage.” Another article describes the difficulties of Russian immmigrants in Israel.

An essay by Ágnes Gereben, histórián, takes us back to the era right after the war: at this time the Soviet Union supported Israel yet persecuted all Zionist activities in its own territories.

We publish a series of documents evoking the year 1961: this is when the leaders of the communist party in Hungary had several discussions about how to react to the beginning of Adolf Eichmann nazi mass murderer’s trial in Israel. One of the documents States:

„ When reieasing information about the crimes committed by Eichmann and his accomplices, based on the antifascist front we will need to criticize:

Péter Nádas writer (last year’s candidate for the Nobel prize ) is greeted on his sixtieth birthday by Iván Sanders, translator of his works into English. „It seems like he was fully armed already at the age of twenty when he became known to the public. Today, forty years later he still does not look old.” 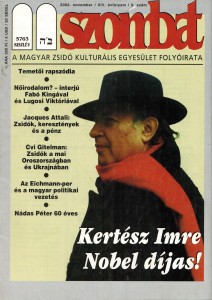