The September issue of Szombat begins with an excerpt from Franz Rosenzweig’s The Star of Redemption in which he speaks about the impor­tance of Yom Kippur and the Day of Atonement.

The purchase of a football club has created a furor in Hungarian media: the highly popular Ferencváros team was bought by a Jewish busi­nessman who is also the owner of another team called MTK that is regarded as the ‘Jewish’ team. The extreme right was outraged that the Ferencváros team, regarded by many as a nation­al symbol, was bought by the ‘Jews’. Many anti-Semitic declarations were made and Hungarian Jewish organizations responded by lodging a com­plaint with the public prosecutor. András Szántó believes that Gábor Várszegi decided to buy the team because it is the single marketable club owing to its popularity. He believes that the MTK club will remain Várszegi’s ‘hobby’.

The compensation moneys paid out to Hungarian Holocaust survivors is handled by the Hungarian Jewish Heritage Fund. In our report we describe the debates among members of the fund’s board of directors.

Our section on Judaism and women offers a report on the conference focusing on Jewish fam­ilies held by the Berlin-based Beth Deborah. The participants agreed that the traditional father-mother-child model, the so-called ‘biological fami­ly’ forms a special subcategory within the concept of the family and that ‘family’ in the wider sense of the word now also includes childless couples, singles and homosexuals.

In the battle for the ‘souls’ of Ukrainian Jews who have opted to remain in their homeland, the followers of progressive Judaism have been out­done by Orthodoxy, primarily the Chabad move­ment. Fifty-four of the sixty Ukrainian rabbis belong to Chabad, while progressive Judaism only has two rabbis. The former had a budget of USD 27 million, while the latter had to make do with USD 1 million.

The younger generation of Israeli writers are not involved in politics to the extent that older writers, such as Amos Oz or A. B. Yehoshua were. The author of an article published in Haaretz believes that the reason for this should be sought in the dissipation of the vision of a uniform Israeli soci­ety that was self-evident to the older generation

The West expects Israel to honour human rights in spite of the fact that the country is practically at war and that relations between Israelis and Palestinians can hardly be compared to the friend­ly relations between Denmark and Sweden.

András Stark’s essay focuses on the Jewish motifs in Miklós Jancsó’s films. András Petőcz offers a study of two novels by Isaac Bashevis Singer. In his interpretation both novels are preoc­cupied with the same theme – the disintegration of communities based on traditional Jewish values.

Iván Sándor, who has published over thirty vol­umes, speaks about his ars poetica to Pál Várnai. “There exists an authoritative literature that, althoug widely in the present, is soon forgotten, there is one that is read by few, but nonetheless becomes more deeply rooted in the readers’ con­sciousness, in literary taste and in culture with the passing of time.” 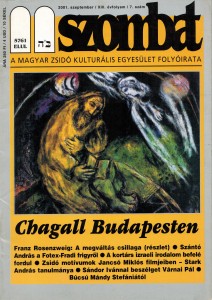