During the last four years of the FIDESZ-government the country has seen a strong economical development and major technological advances. Meanwhile the dinamics of the right wing has trig­gered a surge of nationalism, a conservative and corporativist mood among those in power. As this is a sensitive area for Hungarian Jews, they have reacted – according their traditions – by assuming the assimilationist, antifascist point of view. This reaction is understandable but the assimilationist strategy definitely prevents the intellectual modernisation and the democratisation of the Jewish community – can be read in the editorial.

Attila Novák, however, points out that an uncon­ditioned commitment to MSZP (the present opposi­tion) should not be our reaction to the governing party’s false historical myths, attempts at centralis­ing power, establishing a clientele and taking public property. The leaders of MSZF behaved in the same way when their patty was in power. The only, but sig­nificant difference between the two parties is that MSZP does not have links with the ultra-right wing.

In our Central Europe section – supported by the European Association of Jewish Culture – five authors are introduced.

We publish details from the diary of Judita Salgó, a Hungarian Jewish writer living in Serbia, who, representing a double minority, experienced the surge of Serbian nationalism in 1988.

Stanislaw Krajewski sums his essay (Jews, Communism, and the Jewish Communists) up with the following lines “There was no Jewish commu­nism, but there were Jewish communistsd Discussion of this must not be left to antisemites.“

We publish an excerpt from Piotr Szewc’s novel, “Dusks and Mornings”. The novel guides the reader to Zamosc in Galicia, the native town of the Polish writer. The everyday life of a pre-war Polish, Jewish town is depicted with a special focus on time: the time of a small town and the story of its streets, houses, tradesmen, craftsmen, stones, streets and the story lasts from morning until dusk.

Simon Markish, in his book “Russian Jewish lit­erature between the Second World War and the Perestroyka” discusses that Jews who write in the languages of other nations belong to the literatures of two nations simultaneously.

Maxim Biller, who lives in Munich writes an essay about Ignatz Bubis, who – until his death in 1999 – had been the president of the Central Council of German Jews. According to the writer “he wasn’t a great German” and Germans favoured him only because he was willing to forgive their sins.

The overview is finished with a chapter from Ruth Ellen Gruber’s book “Virtual Jews”. The book is an important reading because the writer seems to be unique in highlighting the fact that the disappearance of great masses of Jews from the Central Eastern European area has resulted in a state of virtual survival: there is a tendency to refer to certain elements of the Jewish past with the aim of developing tourism.

In our Israel section we publish two interviews. Juli Tamir left wing politician stresses that occupa­tion should be ended in order to maintain the democratic and Jewish feature of Israel. If the Territories remain parts of Israel, the country will soon lose its Jewish majority. Shalom Harari, polit­ical and security expert however states that for the Islamic ideology so dominant in Palestinian society there is not the slightest prospect for compromise. Hamas and Islamic Jihad consider every single square centimetre of Palestine – including Haifa and Tel Aviv – holy and belonging to the Muslims.

Yehuda Lahav summarises the results of a Jewish demographic research, carried out at the Hebrew University of Jerusalem. According to the survey 37 per cent of the world jewry lives in Israel. However, if the present trend continues, the num­ber of Israeli Jews will reach and later exceed 50 per cent. 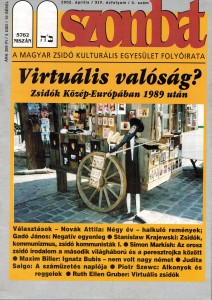