We publish a statement of solidarity with Israel because of the recent terrorist attacks. The document was signed by fifty Hungarian intellectuals who condemn Palestinian terror and wished to express their sympathy with the victims.

“We mostly go straight home from school and do not risk going in to crowded areas such as the town centre and try to avoid the wider, busy roads. Even when we take the bus we do not travel in peak hours or on the routes where there have been explosions before. When I take one of those buses I keep wondering on board how many passengers make it worth for a bus to be blown up. My eternal optimism will always reassure me that just then there are not enough people there for that.” Everyday life in Jerusalem during the Al Aqsa Intifada. Patrícia Margit reports.

The Hungarian Jewish Heritage Fund was set up three years ago with state support and was intended to sort out matters relating to the compensation of Holocaust survivors in Hungary. In November 2001 the Board of Trustees made Gábor Sebes, the leader of the staff at the Foundation, step down. “I am an alien body in the Hungarian Jewish communi­ty – claims Mr Sebes in an interview. – I do not belong anywhere, I did not join any organiza­tions I did not look for any associates. This has proved to be insufficient in the present local culture.” János Gadó author of a com­mentary on the case seems to agree with this statement: “It was still an important political step to have introduced expertise free of poli­tics into Jewish public life. This paradox caused the fall of Gábor Sebes.”

In our feminist section “Esther’s bag” we publish an interview with Zsuzsa Beney, a writer. “I never felt I was being treated differ­ently just because of being a woman. For other resons, yes I have felt discriminated. For being Jewish for example. Or in Western Europe for being Eastern European, and for things in my private life, but as a woman I only have been in situations where I was treated like a woman and this was a matter of course.”

Viktória Lugosi writes about the spiritual darkness that she felt was present in the Advent speech of Lóránt Hegedűs, the anti-semitic protestant parson.

The Holocaust Remembrance Day was intro­duced by the Ministry of Education and was celebrated this year for the first time. The Hannah Arendt Association organized a round­table discussion on the occasion, inviting well- known Hungarian writers and social scientists. A quotation from what András Kovács sociol­ogist said: “The post-Holocaust situation has created an unsolvable paradox, bringing on unbelievable tensions. Unprecedented philo­sophical issues had to be phrased, it created a whole new theology. To the question as for what axioms can be considered valid after the Holocaust, a Jewish theologist said: only those which can be accepted even at the sight of burning children. This reflects the paradoxical situation in which we all are while discussing this matter.” 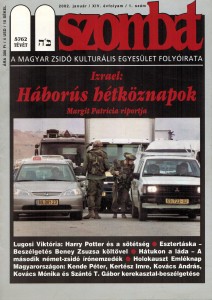