„Considering the terrorist attack against the WTC, together with the „anti-Zionist” violence aga­inst Israel in the last 12 months it becomes clear that those who oppose global capitalism and the world of free markets, will sooner or later always get to Zionism/the Jews/Israel( the irrelevant opti­on to be deleted). And this seems to work the op­posite way as well: those who are against the Jews will put New York on the same axis with Tel Aviv – “writes László Seres on the latest events in New York.

„ Voices of hatred accompanied the conference: at the students conference held before the as­sembly in Durban the representatives of the Inter­national Association of Jewish Students were not even allowed to reply to the accusations. The NGO conference was accompanied by anti -Israel mass demonstrations culminating in the hatred march of 30th August: there the fifteen thousand partici­pants lifted a Palestinian child in the air together with some children’s clothing covered with a she­et soiled with blood.”- quote from our report on the conference.

„Like all anti-western ideologies, Islamic funda­mentalism used Israel as a scapegoat, just like the Soviet Union and others did before. The commu­nism based anti-Zionist battle has lost its fervor but closely following it comes the new ideology: the hatred of Israel on a religious basis. While the Israelis watched the peace talks with their hopes up, the propaganda of hatred in Palestinian soci­ety has not diminished at all, only that the voice of Islam has taken over the lead” -comments János Gadó on the last year of the Intifada.

As a result of the federalizing politics of the re­organizing political right in Hungary, MIÉP (Hunga­rian Justice and Life Party), an openly anti-Semitic party supports Fidesz (Association of Young De­mocrats, the biggest party in the governing coaliti­on), though this latter claims to be positioned on the center right, Fidesz is unaware of the fact that it will loose its character as a central party if – for tactical reasons – it does not distance itself from MIEP’s anti-Semitic statements – Attila Novák analyzes the political situation in Hungary.

Ádám Ganter comments on the Summer Je­wish Festival: “Who is this festival targeting? Per­haps the Jewish community in Hungary? Or non Je­wish Hungarians? Or Jews outside Hungary? Maybe the organizers intended it to be a tourist attraction for those Portuguese, Spanish and Oerman tourists who attended the festival events at Herzl Square?”

This month, our „Esztertáska” (Esther’s bag) sec­tion is covering the topic of Jewish marriages: Andrea Kuti explains how they have changed the usual rituals in a way that the bride and the brideg­room play an equal role. An Israeli lawyer Sharon Shenav talks about how male-centered Jewish ort­hodoxy is, and she describes how – often hopelessly – difficult it is for a woman wanting to divorce.

„Hot coffee and toast” is the title of the quotes from Gábor T. Szántó’s new novel to be publis­hed describing the atmosphere of anti-Zionist mock trials in 1949.

„I never encountered anti-Semitism before the war. I was ten when the war started, and everyt­hing changed. Stalin gave in to Hitler. Of course, officially there was no such thing as anti-Semitism. Even at the time when it was said that Jews are the agents of imperialists. There were terrible litt­le anti-Semites in our school.”- says Simon Markish, literary historian and translator in an interview where he talks about how his father, Perec Markish, the great Yiddish poet was executed in 1952 in a mock trial. 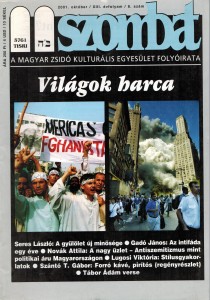