In “A Requiem for my Childhood” Pál Várnai remembers Kiskunhalas, a small town in the Hungarian Great Plain, where in his childhood between the two World Wars, Jews and non-Jews lived next to each other in harmony.

We report on the assembly of the Budapest Jewish Community and that of the Federation of Jewish Communities in Hungary. Both went the same way as they always have: the delegates moaned about not getting any information, and then they accepted all the proposals by vote. As a new feature, representatives of youth groups turned up uninvited at the assemblies to stress the fact that despite all the promises they had been given, the management still has not allocat­ed them sufficient place for their meetings.

Has not time come yet to ask from ourselves if our Jewish identity goes beyond the endless men­tioning of the Shoah? Should being a Jew not entail something more positive as well? -asks Naftali Kraus in his article criticizing the Hungarian Jewish community”s perception of its identity.

“In a way all through his life he was fighting a holy war to prove the world has no right to ques­tion the importance of religion, and to prove that religion had no justifiable claim to meaning or importance in a secular sense. The central notion of his religiousness was the notion of lishmah (for its own sake) from the Talmud. Philosopher György Tatár wrote this in his essay on Yeshayahu Leibowitz. We publish another writ­ing by the recently deceased famous Israeli thinker, under the title “The Religious Importance of the State of Israel”

Around the world lively debates accompanied the publication of Jan Gross’s book “neighbors”. It is the story of a Polish small town where the Jewish population was brutally slaughtered by the same neighbours with whom they had been living next to each other for decades. We publish Alvin Rosenfeld tlolocaust literature professor’s essay on the book.

“If I go to Jerusalem, I’ll become a suicide bomber” – sings a girl in a children’s programme on the Palestinian TV channel. Our article presents extracts from a Palestinian newspaper and from a children’s television programme, in order to depict the atmosphere where the idea of Palestinian resis­tance is bom.

We publish parts of Viktória Lugosi’s book Ajvé (Oy weh) to be published for the Hungarian Book Week in June.

The next issue of Szombat will come out after the summer break, for the Jewish Summer Festival. 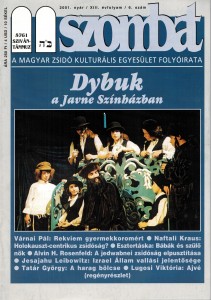