Attila Novák’s article “Those Who Return” focuses on young people who, from a state of assimilation, turn back to a traditional Jewish lifestyle. Although few in number, the pres­ence of young people who have chosen Judaism as adults can already be felt today within the orthodox community as well as in certain conservative synagogues. These young people often have to fight for their Jewish identity at the price of conflicts with their families and immediate environment. The paths taken have been various: some have compromised the rigour of their religious atti­tudes and have become conservative; some have turned their backs on Judaism; others have left their native land behind and are studying in foreign yeshivas in order to con­tinue their strict religious practices.

The Jewish community has often been criticised in the past for its lack of trans­parency in financial affairs. Following public criticism at a general assembly the managing director ordered an inventory of the entire community to be drawn up. The investigative report compiled by János Gadó reveals that only the director and his immediate col­leagues have information regarding the progress of the inventory. Since elected bod­ies and leaders have no such information, we are still groping in the dark and every­thing appears to have remained unchanged.

A report of the general assembly of the Hungarian Orthodox Jewish Community is included in the present issue. It was clear to the participants at the assembly, the at­mosphere of which was reminiscent of the Kádár era, that all information is concentrated in the hands of the president: he alone knows the size of the community’s budget and the number of members and taxpayers within the community.

“I love. German art and culture, and 1 am really fascinated by it. Despite this, I am unable to forgive.” This statement was made in the course of an interview for the journal made with Gila Almagor, a grande dame of the world of Israeli theatre and film. To date she has played in more than fifty films, most­ly in leading roles, and in recognition of her achievements has received awards at many Israeli and foreign film festivals.

In Budapest, two enthusiastic actors, Katalin Ambrus and László Bassa, pre­sented a stage adaptation of some of the writings of Zeev Zhabotinski. We include here a review of their performance.

This month, our section on Judaism and women in its reflections on Passover, ex­plores the issue of women’s liberty. Among other things it introduces women’s move­ments in contemporary Israel, Yugoslavia and Argentina, which are mainly directed against the military establishment. Although these opposition movements are usually coupled with liberal and leftist, and often with feminist and pacifist, tendencies, this is not a requirement. In direct contrast is the Israeli “Women in Green” movement, which stands for firm political action.

In her study “Hungarian Jewish Litera­ture”, Dóra Sárdi introduces two writers from the last century who spent their youth in the heart of the traditional Jewish com­munity and only began to participate in Hungarian literary life in their twenties. 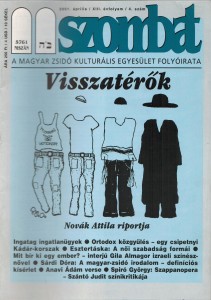