The March issue of Szombat begins with two writings on Ariel Sharon, Israel’s newly elected Prime Minister. Yehuda Lahav por­trays the politician as a radical right-winger and poses an all-important question: do we have a new Sharon standing before us or simply the same old wolf in a lamb’s cloth­ing? László Bányai presents a politician who is neither cruel, nor extremist, and whose presentation as a wolf or hawk is nothing more than hostile propaganda.

Also included in this issue is Emanuel Lévinas’ essay, ‘State and Religion of Israel’.

Tamás Halász reviews the Jewish motifs in István Szabó‘s films, no doubt the best- known Hungarian film director. “In István Szabó’s films the Jewish elements were usu­ally illustrations, finely drawn details or bright, passionate sparks, but rarely a main motif; the Jewishness of the Jewish charac­ters is often intentionally ambiguous, often little more than a hint, or at best plays the role of ‘best supporting actor.”

Our report, “A difficult birth”, describes the political tug-of-war concerning the renew­al of the advisory board of the Hungarian Jewish Heritage Foundation.

In his highly subjective essay, György Petőcz examines his own Jewishness. “My attraction to Judaism began with the per­ception of my own existence as an outsider, already as a small child. The experience that for some reason or other I am unable to min­gle with the others. That somehow people always notice me because of my separate­ness.”

Our section on Judaism and women exam­ines the problem of tradition and indepen­dence in Jewish women’s lives. The articles in this section all focus on how social changes, work and education influenced or prompted Jewish women to seek new alter­natives and how they tried to combine this with traditional female roles.

Our documentary section, “Under pres­sure”, takes the reader back to 1962. According to the reports of the secret police “members of the Israeli embassy are most welcome guests in the Jewish communities. They are usually prominently seated, for all to see, and the Israeli anthem is often sung in their honor.” The Communist administra­tion often employed loyal officials of the Jewish community to uproot the “Zionist pestilence”. 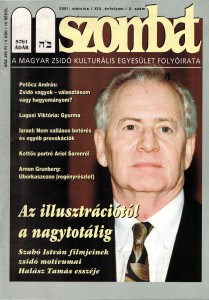