At the beginning of 1999 Hungarian Jews were allocated 30 000 forints by the Hungarian state as compensation for their relatives lost in the Shoah. Meanwhile relatives of vic­tims of the communist dictatorship were granted one mil­lion forints (8 years ago). The Federation of Jewish Communities in Hungary appealed to the Constitutional Court which then stated that the amount of the compensa­tion (30000) was against the Constitution. “The Hungarian government has a number of alternatives, the question is whether Viktor Orbán’s government wishes to sort this issue out in an acceptable and fair way, or whether they carry on with the tactics and unconstitutional laws of their predecessors, trying to outwit the already many times humiliated victims and their relatives.“- claims the author of our comments on the decision of the Constitutional Court

“Jewish culture, history and religion are male centered, so the task of feminists is to bring Jewish tradition in har­mony with the individual experience of everyday life. Feminism changes both the religious and the secular aspect of a Jewish life. Hew trends in society, liberal Jewish theology, the more and more different Jewish communities all prove that many people feel the need to redefine their relationship to Jewish tradition.” – a quota­tion from our new feminist column ‘Esthers bag’. The edi­tors of this column describe this time the life of Gisi Fleischmann, a key figures of Jewish resistance in Slovakia between 1940 and 1944.

“Twofold criteria for high treason’ – is the title of an essay by Moyses’ about the Hungarian government preparing a list of those who “damage the country’s repu­tation” through their publications abroad. However pro-government, right-wing journalists and reporters often quote those intellectuals of foreign countries who are rad­ical critiques of their respective countries. Extreme leftist Israeli Uri Avineri is one of the favorites of the media sup­porting the Hungarian extreme right.

Szombat writes about Tsiune Sugihara Japanese con­sul in Lithuania who in 1940 organised one of the largest scale rescue of Jews in World War II. He issued more than two thousand visas to Japan for Jews fleeing from Poland this way saving the lives of at least 6000 people.

“I do not believe that preconceptions and hostile atti­tudes toward Israel are different in any way from classic anti-Semitism…The only difference is that today the Jewry constitutes an active part of foreign policies, and this was not the case before. But the same theological concepts are still there” – says György Tatár in an interview on the occasion of the publication of his new book Israel – a landscape in a battle”.

Hungarian audiences have been able to see a playful, yet serious, though not perfect film recently. In reviews often referred to as a film about Jewish existence, Glamour of Frigyes Gödrös in the twentieth century, through the stormy years of Hungarian history. But unlike István Szabó’s Sunshine, this film does not describe Hungarian history through a series of martyrdom.

The Jewish community in Sweden with its 20 000 members has set up a European Jewish cultural and train­ing institute. The Paideia Institute breaks new ground: its purpose is to present the awakening strength and self-con- science of Jews in Europe, we publish an interview with Barbara Spectre, director of the institute.

In our column “Under pressure” we publish documents from the archives of the secret police. This time it is from 1968 when young Jews tried to organize a club through the official Jewish Community. But because of the lack of trust between the young and the community’s leaders loyal to tire state even a meeting in person could not take place.

Shakespeare’s ‘Merchant of Venice’ have been per­formed on Hungarian stages several times until 1948 and after 1985. Tamás Koltai‘s study gives an overview of the various interpretations of Shakespeare’s theater piece in the last 120 years in Hungary. 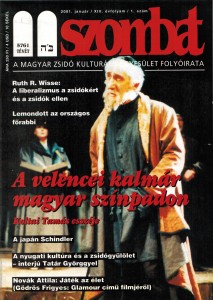