In his article, “Red Budapest – Black Budapest”, Attila Novák notes that “irritated by the shady financial scandals of the Socialist-Free Democrat coalition, the electorate voted for the Fidesz-led coalition. Beside the traditional Christian Democrat and Smallholders Party voters, the Fidesz essen­tially won the election with the votes of the liberals and conservatives who longed for something new. Perceiving that the party was not firmly anchored either socially or institutionally, the leading party of the new coalition decided on a rather bold move for purely political reasons: to widen the barely existing red-black cultural division of the country artificially from the state budget”.

We continue our publication of pre-1989 docu­ments from the archives of the State Office for Religious Affairs. Published here is a report from 1965 by Endre Sós, the then president of the Jewish Community, in which he bemoans the emi­gration of Romanian Jewry. The emigration of Transylvanian Jews, whose majority spoke Hungarian and had a Hungarian culture, was dis­tressing to the president to whom Hungarian cul­ture was dear, even though as a functionary of the Jewish Community he had to uphold another prin­ciple, namely that the Jews were loyal sons of their Socialist homeland.

The Jewish Cultural Festival was held in late summer. Similarly to previous festivals, the event mostly attracted tourists, rather than locals, and the programme too was tailored to the taste of the former. Most of the programmes were organized around well-known artists and performers. The organizers evidently believed – and perhaps not without reason – that it is enough to label some­thing ‘Jewish’ to draw the crowds who were more interested in the ‘oddities’ of this culture, and the tourists who regarded these programmes as gem­stones of Eastern European folklore. This may be the reason for the conspicuously high number of klezmer concerts which – similarly to Irish or Scottish folk music – belong to the realm of pop­ular music. Still, there were some interesting pro­grammes, such as the plays performed by con­temporary actors and the performance of the Arab-Israeli duo in the Dohány street synagogue. The art exhibition, described in a separate article, was also outstanding.

In an interview given to Szombat, Asher Lopatin, rabbi of the modem Orthodox Anshe Shalom Bnai Israel synagogue in Chicago, notes that “the community is very mixed. There are dif­fering levels of religiosity. Some people only come here for the company, some are beginning to discover Judaism for themselves, and there are also people who are strongly observant. There are very many young people, between twenty and thirty, in part because this is a fairly ‘young’ neighbourhood, and in part because they are looking for company and for a sense of com­munity.” 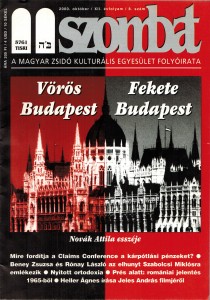