The September issue of Szombat includes a 12 page special section, offering an overview of the Central and Eastern European schools and other educational institu­tions funded by The Ronald S. Lauder Foundation. The Foundation maintains a ‘Lehrhaus’ in Berlin, a city that already has another Jewish school and Kindergarten. Eight pupils from the CIS will start their studies here in September. The Foundation funds three institutions in Prague: a Jewish Kindergarten for 23 children, the Gur Aryeh school, where 113 pupils have been enrolled, the first five years of a primary school and the first and se­cond year of a secondary school, as well as a Jewish Education Centre. In Vienna, the Foundation maintains a complex educational institution, consisting of a nur­sery, a Kindergarten and a school, together with the Ort­hodox Chabad Lubavich movement. This institution plays a major role in the integration of the youngsters whose parents immigrated to Vienna from the CIS. In Budapest which has the largest Jewish community of Central Europe, there are 683 pupils in the Lauder Yavneh school, founded in 1989, the first such institution in Central Europe. The Lauder Yavneh school runs at full capacity, from the Kindergarten to the 18 years old graduating students. In Warsaw the Jewish school be­gan with a single class of fourteen pupils in 1995; the Lauder Morasha School currently has 165 pupils in nine classes, while the Kindergarten has 35 children. The school in Wroclaw, founded two years ago, operates un­der more difficult conditions. These schools are all ho­used in beautifully renovated or newly built buildings. The 28 pupils in the first and second class of the Jewish school in Wroclaw are taught in a few rooms of a larger building. The Lauder Reut Kindergarten and school in Bucharest began its activity quite recently. The Kinder­garten was opened in September, 1997, while the scho­ol held its first class in September, 1998. The Kindergar­ten has four groups with a total of 70 children, the first, second and third class of the school has 38 pupils. In Sofia the Jewish pupils are taught in a state school with 700 pupils; about one-third of these pupils are Jewish. They attend special classes for Jewish subjects. All of these schools are better equipped than the other local schools, thanks to the support of the Foundation. It is thus hardly surprising that many non-Jewish parents wo­uld like to enrol their children in these schools. The wa­iting list is fairly long in each school.

In our article, “Rabbis without ordination”, we note that the graduates of the Rabbinical Seminary of Buda­pest include two young rabbis. In contrast to tradition, however, these two graduate students did not partici­pate in an ordaining ceremony – the reason being that the two young rabbis, who are Orthodox at heart, did not wish to participate in a Neolog ordaining ceremony since they were unable to reconcile this with their Ort­hodox beliefs (the Neolog movement in Hungary can be likened to Conservative Judaism).

Gábor Székely president of the Federation to Ma­intain Jewish Culture in Hungary, the largest secular Jewish organization, has resigned from his post. In an interview given to Szombat, he speaks of his disappo­intment that neither the federation, nor any other Je­wish organization has proven capable of addressing the overwhelming majority of Hungarian Jewry.

Also included in this issue is an announcement by the Jewish Heritage Of Hungary Public Endowment of­fering information on compensation issues. 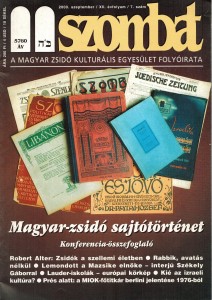