The April issue of Szombat is dedicated to the 50th anniversary of the Hungarian Holocaust. Éva Szécsi’ s essay addresses the need fór remembrance and remindal in the face of oblivion and the fasification of history. A survey of the losses of the Hungarian Jewish community is published together with Ferenc Gáspár’s study on the costs of the Hungarian deportations. A study by Stephen J. Roth, an intemational lawyer, Denial of the Holocaust: An Issue ofLaw’, is followed by the text of a similar draft law, submitted by Péter Feldmájer, chairman of the Alliance of Hungarian Jewish Communities, that has, however, been rejected by the Minister of Justice, claiming that this law cannot be fitted intő the Hungarian legal system. Szombat has issued an appeal to all schools, church congregations and local govemments, asking their help in the restoration of the over 1500 abandoned Jewish cemeteries. In 1964 the Encounter published a debate, about ’ the banality of good and evil’, between Gershom Scholem and Hanna Arendt, taking as their starting point the latter’s book, Eichmann in Jerusalem. We have published their letters written on this theme, together with an analysis by Róbert Braun. How was Jewish tradition affected by the Holocaust? – excerpts from rabbi Ephraim Oshry’ s Holocaust reponsa, as well as Tony Bayfield’s polemical essay, ’A limited God’, here published together with a response by therapist Howard Cooper, shed some light on this issue. Speaking about her own reaffirmed indentity, Teréz Virág – one of the pioneers of Holocaust psychoanalysis in Hungary – recounts her own Holocaust experience. Similarly to his numerous essays, Imre Kertész’ s novels, including his most famous one, Fait heless, that has been translated intő thirteen languages, are concemed with the distinctive attitudes of Hungarian Holocaust survivors. „Auschwitz affects my very words,” says Kertész in an interview given to Gábor T. Szántó about his life and experiences. Eszter Götz has contributed a review of Spielberg’s film, Schindler’s List, won 7 Oscars; we have also included an interview with film director, Judit Ember who, while filming a documentary on the return of one Holocaust survivor to his native village, again re-lives the events that took plance half a century ago. Int this issue we include excerpts from Géza Röhrig’s Vertical Solitude, a soon-to be-published volume of 44 Holocaust poems, and a review by György Szegő of Christian Boltanski’ s installation, in memory of the perished childern, now exhibited in the Israel Museum in Jerusalem. 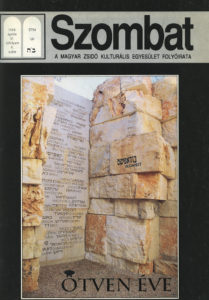