Our correspondent from Israel, László Bányai examines the dilemmas of Israeli soci­ety in an unconventional article. He reckons that the Arabs living in Israel are less and less loyal to their country while – claims the author – the political Left is more for a democratic Israel than a Jewish country. Ho matter how nice this may sound, on the long term it still may threat­en the country’s identity and security.

The Budapest Jewish Community held its annual assembly and the more than 1400 million Huf (5,4 million USD) budget draft was accepted. After a heated debate the assembly refused Ferenc Olti’s (Vice President for Education) pro­posal to get the finances of the Budapest Jewish Community checked by a well known auditing firm. The representatives of the Federation of the Jewish Communities in Hungary reacted to the proposal the same way. Even after a two hour long impassioned discussion they could not make a decision about whether to accept the Sim Shalom reform Jewish community as a member, so the issue was taken off the schedule.

Some 50 people protested outside the Iranian Embassy on 20th of April to express sympathy for the Jewish captives held in Iran. Our article explains that Jewish leaders and the Hungarian Jewish community are equally responsible for the indifference that surrounded the protest, because they failed to call the attention to the event.

Historian Ágnes Gereben’s study Ghettos and concentration camps examines the Jewish experience in the era of German occupation. She believes that various nations adopted different attitudes towards the Jews, sometimes more sometimes less identifying themselves with their fate. The majority of Jews living in the occupied territories was killed and this would not have been possible without the active cooperation of locals.

In an interview Gábor Körner, translator of Polish writer Tadeusz Borowski’s World of Stone (Kővilág) points out that Borowski was “one of the most talented writers among the Nauthors of the Second World War concentra­tion camps”. Partly because he was capable of looking at the life of people kept in camps with­out illusions and idealism. His works are impor­tant because he stressed the fact that not only the Jews suffered.

The interview is complemented by the valu­able comments of Lajos Palfalvi, an expert on Polish culture.

Szombat publishes two more interviews: one with Judit Varnai-Sorer the new Israeli Ambassador to Hungary and one with Eliezer Gilad, head of Szochnut (Jewish Agency). Both representatives have Hungarian origins and emphasise a harmonious relationship with the Jewish organizations in Hungary, as well as with the Hungarian government and various political parties. 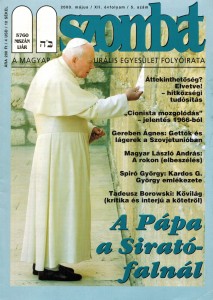