A group of experts, with the leadership of sociologist András Kovács is conducting a survey about the Jewish community in Hungary, questioning 2000 people. We pub­lish their preliminary assessment which was completed after the data collection was fin­ished.

The first conclusion of the survey was that it is rather difficult to examine Hungary’s greatly assimilated Jewish community because the community itself is not known.

These were some of the conclusions men­tioned in the report:

„From a Jewish point of view, there is no reason to be afraid of Jörg Haider and his Freedom Party’s participation in govern­ment. It is not an anti-semitic party that was given power, but rather a party which is will­ing to integrate those who are anti-semitic or xenophobic. A deeply populist party, trying to please all, this is a „media party” with a radical liberal taint and its character, mes­sage and political methods have to be very carefully examined.” – writes László Seres about the much debated events in Austria.

Tamás Halász’s article reports on the Conference on Theatre/Drama History orga­nized by Szombat. The conference was ded­icated to the Jewish participation in the Hungarian theatre and drama. 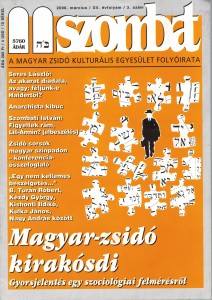