János Gadó’s article presents the Hungarian organisation of B’nai B’rith, whose membership is recruited from the middle generation of the Jewry, grown up in assimilation. The encouragement and assistance of the foreign lodges was crucial in the foundation. After the revolutionary phase (1989-1991) B’nai B’rith members – similarly to those of other Hungarian civil organisations – tend to be relatively pas­sive, exhibit consumerist attitudes and use the organisation as a service. The differen­tia specifica of the organisation is the liai­son with the influential American mother institution, the support of actions against anti-Semitism (this was one of its attrac­tions), and the various events, it could offer something new in this area, and not as a Jewish social organisation in Hungary. The first Judaica auction in fifty years was held in Hungary. The most expensive piece among the 374 objects – mostly books – put up to the auction was a Seder bowl form the end of the 19th. century, sold at the put-up price of $ 4400. A Torah scroll from the 18th century set up for $ 3900 and a complete Talmud in German translation from 1941 set up for $ 1000 however could not be sold. Szombat had announced a call for contemporary Jewish short stories, and received 49 writings. The vast majority of the “competitors” are not well-known writers, which indicates that successful writers, among them many of Jewish origins, show no interest in the topic. The lack of well-known writers, how­ever, did not influence the quality of the writings: we have received excellent ones, to be published in the forthcoming issues. Tamás Ungvári, literary historian looks back on the Jewish question of the first two decades of the 20th century on the basis of the writings of two then contem­porary social scientists. In the name of the strict theoretician liberalism Oszkár Jászi criticises both the semi-feudal Christian society of his age and the assimilated Jewry her regards rootless. Ármin Vámbéry, the excellent orientalist serious­ly criticises the Jewish community, yet argues that its negative attitudes were gen­erated by the hatred and exclusion of the Christian majority. I am indignant, there­fore I am quotes György Gadó, author of our debate column György Bálint , the anti­fascist author, murdered during the war, calling attention to the fact that in the atmosphere of growing anti-Semitism the authors of Szombat cannot be equally crit­ical with the left and the right wings. Where should we point out the mistakes made by Jews if not in a Jewish magazine? answers Attila Novák. He claims that calling indis­criminately all the right wing authors fas­cists might drive the moderates into the camp of the extreme right In his historical analysis Attila Novák summarizes the rela­tion of the State and the Synagogue (Knesset and Beth Knesset) in Israel. 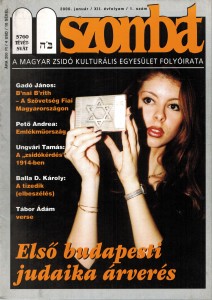