In June 1945 the American troops held up a train in which the Nazi Hungarian (Arrow Cross) Government tried to smuggle to the West, away from the Russian Army, the valu­ables stolen form the deported Hungarian Jews. The 44 wagons load of valuables, worth billions of today’s dollars, was never returned to their rightful owners: a smaller part of it was stolen, or American officers “used” them, a larger part was auctioned in the United States. We publish excerpts from the study of the working group researching the destiny of the “golden train”.

In his essay entitled Reflections about for­getting Yoseph Chaim Yerushalmi writes about the Jews’ relation to memory.

The Hungarian negotiators handed over a list of about 90.000 items to their Russian partners at the negotiations aiming at set­tling the issue of the works of art taken from Hungary to the Soviet Union after 1945. According to László Mravik, art historian and expert of the issue, the chances of the Hungarian claims are not very good, as most of them could not have been justified with documents. The reason for this is the fact that the researchers in Hungary often came up against the resistance of the archivists.

The main topic of discussion at the gener­al assembly of the official Jewish communi­ty was the establishment of a regional body.

The president of the new regional associa­tion is Péter Feldmájer, who lost by one vote at the previous presidential election. The leaders of the community have warned the initiators against “breaking up the unity”. Feldmájer’s critics maintain that for him the important thing is not the regional initiative, but keeping his person in the fore. He did this by a loud campaign against an anti- Semitic book, thus giving large publicity for the anti-Semitic writing.

The American Jewry and through it the American media have played a significant role in the fact that the tragedy of the Jews during World War II, the Shoah came to the fore of public interest world wide – writes János Gadó on Steven Spielberg’s Memorial Foundation for Shoah Surviviors. The price to be paid is, however, that the issue today is discussed not in the language of the European intelligentsia but that of the American mass media. The Europeans might find this tasteless and megalomaniac, as did Henryk Broder, criticising Steven Spielberg, the founding father of the Foundation in the September 13 issue of the German maga­zine, Der Spiegel.

György Csepeli and Márk Mezei summa­rize the work of Péter Forgács, who recon­structs 20th century Hungarian history from amateur films in the light of the Hungarian Jewish bourgeois life. 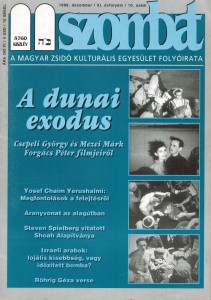