The re-make of the exhibition in the Hungarian pavilion at Auschwitz – intended to replace the current, twenty years old exhibition – stirred a great debate since its concept proved to be strongly apologetic, laying the blame for the deportation of the Hungarian Jews solely on the Germans. In his article analyzing the debate over the exhibition, Attila Novák notes that the preparations for renewing the exhibition could hardly have stirred such a controversy – and should normally have remained the concern of historians – were not public life in Hungary charged with tensions. “The Hungarian right wing regards its opponents as Jews, while they, for their part, consider the right wing to be Fascists – together they nourish a destructive, senseless and age-old conflict which is sustained also out of base political calculation.”

The Hungarian shliach (emissary) of the Chabad Lubavits movement, Rabbi Baruch Oberlander arrived in Budapest eight years ago. He is active in one of the Budapest syn­agogues, he has founded a kindergarten, a primary school and a yeshiva, and he also lectures on Jewish law at the Faculty of Law of the Eötvös Loránd University. Although Rabbi Oberlander has not attracted masses to Judaism, his charismatic personality has definitely influenced Jewish life in Budapest.

Pepsi Island is one of the major alternative music festivals in Central Europe. The over one hundred concerts included various Jewish groups, the best known among them being the Klezmatics. In her report on the festival, Katalin Pécsi describes their suc­cess, as well as how the Lubavitsers – who are concerned with bringing back Jews to the fold of Judaism – fitted into the multi-cul­tural world of the festival.

In another report on the events of the Jewish cultural week in Budapest, Katalin Pécsi notes that most of these events can be assigned to the category of popular culture. One good example is the concert given by Giora Feidman, who also performed “Ave Maria” in the Dohány street synagogue.

Seven buildings and ten artworks have been returned to the Hungarian Jewish Heritage Fund in exchange for the properties seized during the Holocaust. About Fifteen times this amount would be necessary for successfully funding the renewal of Hungarian Jewry – at least according to Péter Tordai, president of the Official Jewish Community. Tordai also noted that although his goals include the strengthening of democracy within the Jewish Community, the funds of the Community would continue to be managed centrally. Tordai also said that the Ft 30,000 given as compensation for each Jew who died during the Holocaust is humiliating and that Ft 300,000 would be more adequate. 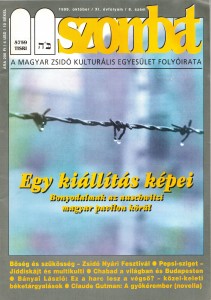