The July 16 issue of Yom Hashishi, an Orthodox weekly published in Israel, carried an article in which Naftali Krausz, an orthodox Israeli journalist, who often criticizes Jewish affairs in Hungary, accused Dr. József Schweitzer, chief rabbi of Hungary, and Dr. Ernő Neumann, rabbi of Temesvár (Timisoara in Romania) that they had issued conversion documents for various sums of money to Romanian women who wished to marry Israeli students studying in Romania. The matter was subsequently taken up by the right-wing Hungarian daily, Napi Magyarország, which called the affair “an international scandal”. According to Naftali Krausz, the converts had no inkling of Judaism, this being the main rea­son that he concluded that the rabbis who had issued the documents had probably done so for a certain sum. The two implicated rabbis did not deny the fact of the conversion, but they claimed that there had only been about 4-5 converts and they had an adequate knowl­edge of Judaism.

After a seven years interlude, rabbis have again been ordained in Budapest. However, the diplomas of the two newly-ordained rabbis do not include the traditional yadin yadin expression, enabling them to be members of the reli­gious court – even though this is through no fault of the two young rabbis, but can rather be attributed to the fact that after decades of iso­lation, the Rabbinical Seminary of Budapest is again active in an international environment and the qualifications set down in the rabbini­cal diploma are taken seriously.

“The Jews have finally managed to be equal with others, but they have still to achieve equali­ty among themselves. There are still two types of Jew as far as restitution is concerned: full-right Jews living in Western Europe, the US and Israel, and Jews without any rights – the Jews living in the former Socialist countries” – claims Péter Feldmájer, who blames the Claims Conference for the discrimination of Eastern European Jewry.

American Jewry as seen though Eastern European eyes – could be regarded as the leit­motif of János Gadó’s account of his trip to the US, who visited Washington on the occasion of the Annual Meeting of the American Jewish Committee. In his report he offers a description of how American Jews promote their interests, for example through pressure groups.

The section of restitution offers an overview of various informations concerning restitution for Hungarian Holocaust survivors.

“Jesus’ ‘original’ teachings should not be conceived as a static, geometric formation, a logical and closed system, but rather as a process. It was only natural that the disciples continued their Master’s work and continued to interpret and re-interpret his words. The Sages of the Talmud did the same with their tradition. One question that needs to be answered is to what extent Jesus’ activity influenced Jewish tradition. The ultimate goal of any proper research is not the study of the life and teach­ings of one man, but rather of the process of how tradition was continuously transformed” – claims Tamás Visi in his essay, “Jesus the hair­dresser”, in his review of the books and studies on Jesus’ life published in Hungary. 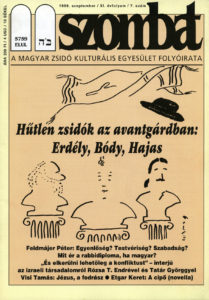