A special section has been devoted to the ‘populist-urbanist conflict’ which has character­ized Hungarian intellectual life since World War 1. The ongoing debate between the ‘populists’, Hungarian intellectuals who are primarily com­mitted to national ideals, and the ‘urbanists’, intellectuals – mostly Jewish – who are more committed to democracy and civic rights is discussed by three scholars. Historian Mária Schmidt, who is currently an advisor to the current right-wing government, argues that anti-Semitism, which again appeared after 1989, was in fact provoked by the urbanist camp, the ‘media intellectuals’, for their own purposes. In historian András B. Vágvölgyi‘s interpretation the seven decades long debate reflects the con­flict arising from the populist group’s willing­ness for compromise with the ruling power and the urbanists’ emphasis on preserving their intellectual independence. According to politi­cal analyst Tamás Fricz this conflict has by now become institutionalized and integrated into Hungarian public life in spite of the claims that the debate has all but disappeared or become senseless.

Following the election of a new leadership, the Jewish Community of Budapest and the Federation of Jewish Communities of Hungary both held their first general assembly. Although both organizations now have a new president, the assembly was held according to the usual scenario. The joint administration of the two institutions submitted a report on the activities and the budget; the more elderly delegates com­plained about the scarcity of funds allotted to their community, while younger delegates gener­ally criticized the lack of a broader and future-oriented concept. (One of the delegates noted that the restoration of a synagogue in a settlement which no longer has any Jews costs about twice as much as the launching of a Jewish radio broadcast.) The administrative leaders patiently explained why the delegates’ requests could not be fulfilled. The budget of the two organizations exceeds Ft 2.7 billion (c. $11.7 billion). Over one-half of this budget comes from state subsi­dies, 20 per cent from bank loans, 20 per cent from the proceeds of the community’s own, not insubstantial assets, while the Joint contributes about 5 per cent. The community tax makes up less than a half thousandth of the budget.

The first test case, initiated by former Hungarian Jewish prisoners against German companies, has been brought before a New York court. Ed Fagan, a New York attorney, expects an out-of-court settlement, as a result of which all former Hungarian Jews deported from Hungary and forced to work for German companies would receive compensation. He expects that the whole process will take about two years.

Gábor T. Szántó’s Paris travelogue offers an intimate view of French Jewry, tinted by the tra­ditional envy of Hungarian intellectuals over the richness and variety of life in France, compared to the dullness in Hungary.

Wer publish a laudation for philosopher Ágnes Heller‘s 70th birthday. In contrast to other philosophers of her generation, Heller was capa­ble, in the past ten years, of integrating an open­ness and a sensibility to Judaism in addition to other narratives, and she was also capable of placing her own life in this historical and intel­lectual context – which undoubtedly represents one part of the history of Hungarian and, perhaps also, East European Jewish intellectuals. 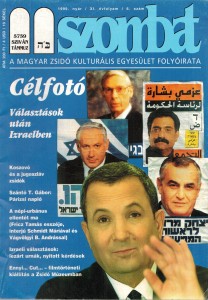