At the end of the centennial celebrations of Zionism we give a brief overview of the hundred years of the Zionist movement. Zionism is one of the few ideas which have not turned into a nightmare after they had been realized. This is the unique experience of the writer, said the Peruvian writer Mario Vargas Llosa as he received the Jerusalem Prize. In his essay the Israeli writer Amos Oz talks about exactly this process. How were the seeds of a model society created in the 1930s in Palestine along the struggles of Socialist Zionist pioneers, and then how was Israeli society formed by the various waves of immigration and the trauma of the Holocaust. Gábor Balázs writes about the religious reception of the the Jewish national movement. Zionism was a new phenomenon in Jewish history and it was interpereted by various rabbinic authorities in very different ways. Based on these views contradictory bút sometimes very radical movements emerged: some condemn Zionism utterly, while others think of it as the only possible way.

Only the obsessed stayed in Israel – we read in an article about Hungarian Jewish youngsters who made aliyya in Népszabadság, the most widely read Hungarian daily, upon the death of Gavriel Hirschberg, a rabbinical student who was murdered in the Old City of Jerusalem. In his report Péter Kertész tells us what the life of these youngsters is really like. Acculturation is a long and painful process. Nevertheless, Israel is a definitive and formative experience even for those who decide to return to Hungary.

Among Hungarian Jewish young people we can track three different ’ideological’ trends – notes Tamás Bíró in his article which is based on his personal opinion. There are the Orthodox religious, the Zionist and the ’party-Jews’.

György Kardos G., the author of the world famous novel The Seven Days of Avraham Bogatir, passed away last month. The report of Gábor Ács about a day which Kardos and the Israeli writer Amos Kenan spent together in Budapest is dedicated to his memory. 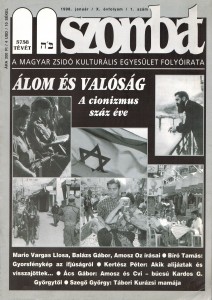