The Hungarian Jewish Heritage Fund has received applications for support for over 180 million Forints. Most of the applications came from the organizations of the Federation of Jewish Communities, even though the Federation, being the single heir of prewar Hungarian Jewry, will probably get 500 million Forints of extra income this year. This latter sum is not available for any other Jewish organization – the contradiction is voiced in our editorial.

It is now certain that survivors of the Holocaust now living in Hungary will receive a compensation of US $ 1000 from the Swiss Holocaust Fund. The only questions remain how many people will receive it, when and in what form.

We report about the conference held on the occasion of the 120th anniversary of the Rabbinical Seminary of Hungary.

Our section called ‘Uniting Europe’ contains three essays on the topic. Jewish culture is very important, writes Gábor T. Szántó in his essay, but if the Jewish community can not find a way to unite it with tradition, it will not be enough for survival.

According to Diana Pinto Jews must prepare themselves for the day when the Holocaust will cease to be the sine qua non of their history, separating them from their fellow citizens.

In the opinion of Shmuel Trigano Jewry, like any other community, cannot survive without a single great unifying idea, but the Torah can fulfill this role for both the religious and the secular. 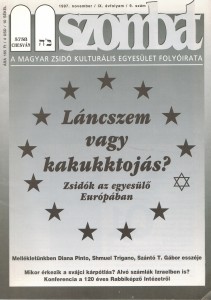