The financial situation of the Szombat is still critical. We had better not to expect the state or major Jewish foundations to cover all of our costs. The Jewish civil society should support Szombat, otherwise we are likely to cease to exist next year – States our editorial.

The Hungarian Jewish Heritage Fund – created for handling all the problems of the restitution of Hungarian Jews – had been finally legally set up. Holocaust survivors – over sixty years and living in Hungary – will get their monthly compensation from the beginning of September this year. The amount of this sum rises by the age of the survivor: in case of a sixty years old male this will amount to 2860 HUF (cca. 15 USD) as long as a 90 years old male is entitled to 22734 HUF (115 USD). The same foundation will be the owner of the fortune, given by the State to the Hungarian Jews as a compensation for their properties looted by the State in the period of the anti-Jewish legislation. The value of this fortune (7 real estates and 10 valuable paintings) is estimated to be 1.5 billion HUF (7.61 million USD). The yearty income of this fortune is to fund the ‘Jewish civil society’, the revival of the Jewish community life in Hungary.

After a long deliberation decision had been made: Alfréd Schöner is the new general director of the Rabbinical Seminary of Budapest. The previous director, József Schweitzer will go on holding the title of the „national chief rabbi”, a rather formai title which enables him to be the first representant of the Hungarian Jewry on various occasions.

„Diaspora and Art” is the title of a great exhibition is the „Hungarian Jewish Museum” which offers a great collection of paintings and sculptures of Jewish artists. A conference with the same title had been organized recently in Budapest. A short summary of each paper, presented at the conference is published in this issue of Szombat

Elaine Kalman Naves, who emignated to the United States after the Shoah, visited Vaja her birthplace after fifty years. Her book on this cathartic event will soon be published in English. Excerpts from the book are published in this issue.

The Palestinian society, educated in the spirit of hatred of the Jews in the last fifty years, will not turn ovemight into a peace loving commu­nity. Lanje sections of this society do not condemn terror against Jews. With this background it is difficult to expect Arafat do his best against extremist groups, since he would eam few sympathy among his own people – states our artide, reflecting on the bombing of the Mahaneh Yehudah marketplace last August. 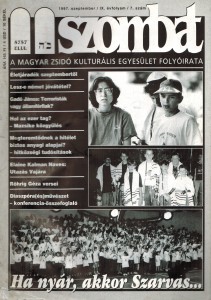