Our October issue begins with the recollections of Pál Várnai about how he, a Hungarian Jew and a Central European intellectual, tried to find his place in the pragmatic Canadian society after he had left Hungary in 1956. The issue of setting up a public Foundation for the compensation of Hungarian Jewry was discussed in Parliament – we are quoting from some of the important addresses. Gusztáv Zoltai, the executive director of the Jewish Community informs us about the future use of property which the Jewish community will recover as compensation. He assures us that there will be a contest for the architectural plans of the new building of the Jewish gymnasium, as it is prescribed by law. From another source, however, we are informed that the construction plans are already on the way. We are presenting an interview with the director of a new religious learning institute, the Budapest Kolel.

Our section on intemational affairs begins with a briefing from Anti-Semitism World Report 1996, followed by a report on the problems of English-speaking Jewry in French Quebec. In the ’Israel’ section you can read about the acculturation problems of Asian and African guest workers in Israeli society. One of our colleagues reports about the archeological excavation of the ruins of Ekron, the one-time Philistine city.

The cultural section includes some excerpts from the Diary of Theodor Herzl, the description of his visit with the Turkish Sultan. János Bollók and Tamás Visi continue and finish their debate about Philon of Alexandria. You can read a chapter from a Hungarian Jewish family saga by Ariel K. Gy. Klein. György Szegő introduces the Israeli pavilion of the Venice Biennial. 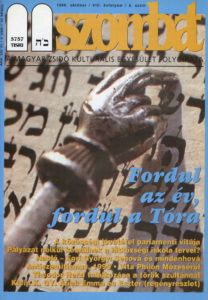