The Dohány Street synagogue will be reopened in all its former splendour in early September. The report on the reconstruction work, however, also notes that the synago­gue is generally only filled on the High Holidays and in the tourist season. The Jewish community will get back fifty-four of its seventy buildings that were nationalized in 1948 and will be reimbursed for the rest. Dr. Alfréd Schőner, the former Chief Rabbi of Hungary, who lived in Israel for the past six years, has retumed to Hungary. In an interview given to Szombat, he notes that he will be the director of the Religious Teacher Training College where teachers of religion and social workers are trained, and not of the Rabbinical Seminary which is currently facing serious Financial problems. The Library of the Rabbinical Seminary, one of the three major Jewish libraries in Europe, has still not recovered from the damages caused by World War 2; however, a generous DM 10 million grant from a German fund and a further DM 100 million that has been promised will no doubt remedy this situation, according to the director of the library.

In our section on world affairs, we have again included a report on the Jewish deposits in Swiss banks. Also included in this sec­tion is a report on Jewish life in Vienna and a conference on the Messiah organized by the Reform movement in London.

An essay in the section on Israel analyzes the decreasing influence of left-wing Zionism and the growing influence of Orthodoxy. In our section on Jewish tradition, we publish a sermon for Rosh Hashanah by Jonathan Eybeschütz, held in Metz in 1744.

In our section on history we have included a review of the founding of the Dohány Stre­et synagogue, as well as a yet unpublished essay by Raphael Patai, who sadly departed from us this summer, on his father, the very last editor of Múlt és Jövő.

Our section on culture includes a tribute to Miklós Jancsó. the renowned film director who, in spite of his non-Jewish origins, has made several films with Jewish themes. 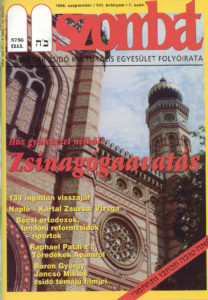