The June issue of Szombat begins with Gábor T. Szántó’s account of his visit to the States. Invited to participate at the annual meeting of the American Jewish Committee, he reports on what he saw and what he heard. Next comes an article on a curious decision brought by the Hungárián rabbis, who ruled that Rabbi Tamás Raj is no longer allowed to continue his rabbinical activity in any Hungarian synagogue. We have tried to elucidate the reasons behind this unprecedented decision and, alsó, its possible implications for all representatives of religious Jewry. Alsó included in this issue is a brief summary of the agenda on the meeting of the Budapest Jewish Community and the Alliance of the Jewish Communities of Hungary (Kehilot). The library of the Rabbinical Seminary has recently received generous financial aid from Germany. On this occasion we give a short teview on the State of the library. In his ironic essay György Gadó (former MP) openly challenges those views which would allow the dissemination of extreme rightist views – all in the name of the freedom of thought.

Judit Bokor’s report from Finland focuses on the roughly 2000 strong Jewish commu­nity, a not inconsiderable part of whom speak Swedish. Also included in this section is an account of recent developments on unclaimed Jewish asset that are deposited in Swiss banks.

In our section on Israel we first analyze the possible implications of Benjamin Netanyahu’s election victory, followed by a short overview of the Reform and Conservative movement’s struggle against the Orthodox ‘State religion’.

Next comes a paper by Gábor Buzási on the enigmatic narrative of the four scholars who entered Paradise contained in the Tosefta. This is followed by Attila Novák’s study on a peculiar cooperation in the later 1930s between the Foreign Office of the Hungarian State – which officially pursued an anti-Semitic policy – and the international Zionist movement: the latter offered to Champion the cause of the Hungarian ethnic minority on international forums in exchange for the freedom to organize their own Zionist movement in Hungary.

We publish excerpts from a novel by Daniel Katz, the Finn Jewish writer, fol­lowed by György Szegő’s analysis, “Modernism as a visual language”, on the Jewish aspects of this theme. 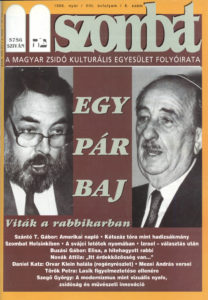