The “Home Affairs” section of the no­vember issue of Szombat begins with art essay by Gábor T. Szántó, written in reply to a questionnaire circulated by the Yahalom Jewish High School that invited reflections on the chances and possibilities of a religious renewal in Hungary. Welcoming all new directions-be they either Orthodox or Reform in spirit-that might enable the community to overcome its current “exhaustion”, Szántó considers a generational change and a democratic renewal necessary in the existing institutions of Hungarian Jewry. “Four hundred million forints (approx. 3 million USD) are needed to fínish the renovation”- also included in this section is a report on the current phase of the reno varion work on the Dohány Street synagogue, the symbol of Hungarian Jewry. The fundraising activity is carried out by the same enterprise that is in charge of the renovation work, whose director has advanced 24 million forints (approx. 180 thousand USD) for this purpose.

“There is not one single abstract or lofty aesthetic viewpoint that can justify the evaluation of artworks without considering their socio-political context”- fumes Miklós Hernádi, who is shocked to find that aesthetes who defíne themselves as “post-modern” are capable of viewing works of art that served the propaganda of Nazi Germany quite dispassionately.

Based on the fígures of the World Jewish Congress, we have compiled statistics on the geographic distribution of Jewish population groups, accompanied by an article describing the difficulties of a demographic survey of the Jewish po­pulation. Also included in out “Foreign Affairs” section is a report on Andrzej Wajda, who is currently working on a film recapturing the last days of the Warsaw ghetto, in which the indifference of Polish society is repeatedly emphasized.

In our section on Israel we have inclu­ded an essay on the social background of the rise of religious Zionism, whilst another writing focuses on the influence of the immigration of highly qualified and artistically sensitive Russian Jews on Israel cultural life.

Also included in the November issue is an extract from Gershom Scholem’s autobiography describing the Jewish awakening of the youth who grew up in an assimilated family.

Our literary section features a one-act grotesque play that is set in 1944, on the first dais of the German occupation of Hungary. 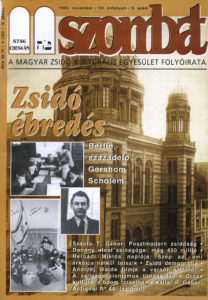