What makes for a Jewish literature? We have probed this question in the context of French, Russian, Germán and Israeli national literature, and we also touch upon the theoretical problems facing the literary histórián in writing a history of Jewish literature.

In our Home Affairs section we publish the comments of the former spokesperson of the Jewish communityon his dismissal, as well as the reactions to his comments. “We shall not always be here, and Hungarian Jewry must sooner or later stand on its own feet”, says the director of the Joint in Hun­gary in the interview given to Szombat, in which he surveys the wide range of activities in which the Joint is engaged.

In our Foreign Affairs section we have included a translation of Hillel Halkin’s letter to Cardinal Lustiger-originally published in the Eorward-,in which Halkin points out some of the grave contradictions between Lustiger’s high position in the Catholic church and the acceptance of one’s Jewish roots. Also included in this section is a brief essay demonstrating the similarities between the scenario of the debates over “Jewish power” in Costa Rica and Eastern Europe.

In our section on Israel we survey the debate over the Jewish Agecy: the reforms that would have shifted the emphasis from aliyah to Jewish continuity, proposed by Avraham Burg, the new president, were rejected by the fírst general assembly.

Also included in the October issue is an interview with Éva Fischer, a painter of Hun­garian Jewish origins currently living in Italy. “One prays, rather than plays on a violin”, says Yale Strom in an interview that also covers East European klezmer music. 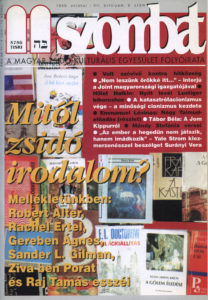