This issue of Szombat contains an essay by Gábor Ács in a shortened form about the sad story of the Jewish Restitution Fund. The Fund was established to handle the property left by Hungarian Jews killed in 1944. The following section covers the present situation of the Jewish property compensation negotiations with the Hungárián Government, highlighting the problems of cooperation between the Jewish negotiators. The most important point of disagreement ids whether the property to be given back should come under the control of the local community or the Jewry living in abroad.

Then follows an elegiac report of the Jewish cemetery in Kozma Street Our reflections on an article in the extreme right wing Magyar Fórum newspaper examine the differences between our approach and their analysis of the relations of Jewry and communism.

In the international section you can read about the Holocaust victims’ deposits kept in Swiss banks even today, we write about how the Rumanian Holocaust is presented in today’s Rumanian media and public life and about the rise and fall of a Japanese anti-Semitic author.

The topic of our israei section is the 3000th anniversary of Jerusalem. Besides the writings describing the past of the city, we also publish an interview.

The essay from the Commentary with a rather pessimistic undertone predicts the division of the city as a logical consequence of the present government’s always compliant policy toward the Arabs.

In the section on Jewish tradition Ágoston Schmelowszky meditates on the high holidays in the spirit of the Mishnah translations.

In our history section we have included a new document írom the period of the so called „white terror” in 1920. We have selected excerpts from Chaim Grade’s novel „The Yeshiva” and in our book review we reflect on Zionist writings published in Hungrian. 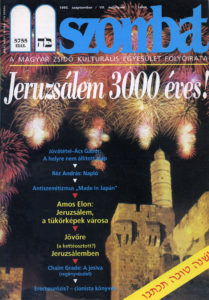